ICC World Cup 2019: England will need more out of their openers against India 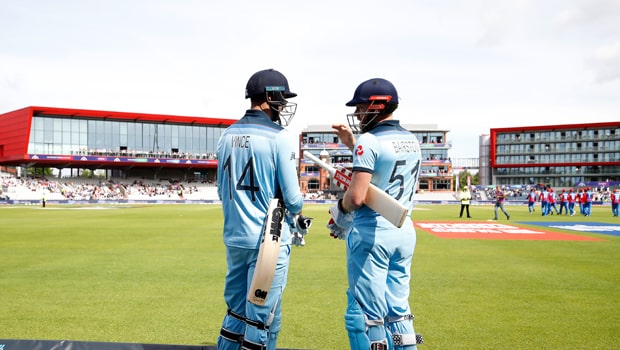 England’s World Cup 2019 campaign has got derailed after back-to-back losses against Sri Lanka and Australia. At one point, it seemed like they were cruising and would make it to the semifinals with ease. But then Sri Lanka happened. The Lankan Lions caused a major upset as they beat England in a low-scoring encounter to throw open the tournament. And then Australia piled on their agony with yet another comprehensive victory over their Ashes rivals.

The equation is simple for England now. They need to win both of their remaining matches to guarantee a semifinal berth for them. Even if not two, they need to win at least one of these encounters and hope that other results go in their way in order to go through to the final four stage. However, getting even one result in their favour isn’t going to be easy as they will face off against two of the best teams in this tournament so far, India and New Zealand, in their next two matches.

However, they should remain calm and should focus on their upcoming clash against India for now on Sunday. But they will need to address one area of concern, in particular, that has played a major role in their disappointing results in the last two matches. It is their opening pair of Jonny Bairstow and James Vince, which has failed to build early momentum for the side, thus hindering England’s progress.

Vince came as a replacement for the injured Jason Roy in the match against Afghanistan. Before that, Roy and Bairstow had put on 141 runs together for the opening stand in three matches at a healthy average of 47.00. Joe Root had opened with Bairstow as well—in the match against West Indies—and put on 95 runs for the first wicket. However, ever since Bairstow and Vince started opening together, England’s first wicket has lasted only for 15 runs on average per match. The highest was a stand of 44 runs against Afghanistan and their partnerships in the last two matches against Sri Lanka and Australia read 1 and 0 respectively.

Although Bairstow still has 162 runs in the last four matches at a healthy average of 40.5, Vince has failed to make an impact with scores of 26, 14 and 0 in the tournament so far. It is going to get even tougher against India’s new-ball attack as opening stands have lasted for only 26.25 runs on average per match against them in this competition so far.

To counter such a lethal attack, England should consider dropping Vince and promoting Root to the opening position. He scored a century against Afghanistan batting at that position and also has an ODI average of over 50 against India. Root has a good technique against both pacers and spinners, and he stands a better chance of scoring against Indian bowlers as opposed to an out-of-form Vince. If this move works out well, England will stand a real chance of getting their campaign back on track.