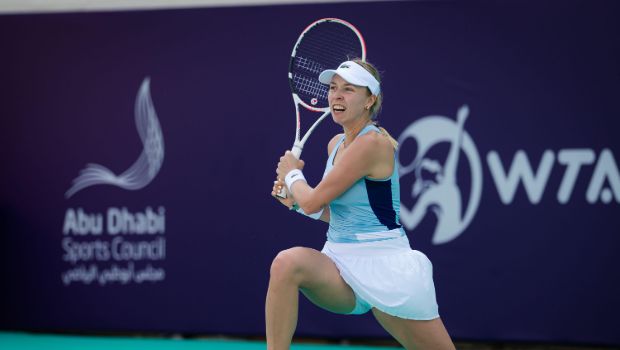 Anett Kontaveit was made to dig deep to defeat Jil Teichmann in the first round of the WTA 500 ladies’ tournament in Russia. Anett Kontaveit, who is seeded No. 2 behind Maria Sakkari, defeated the Swiss player in a three-set game 6-3, 1-6, 6-3 on the opening day of the tournament. The Estonian player came into the tournament after a disappointing show in the Australian Open. She crashed out in straight sets to 19-year-old Clara Tauson in round two.

This pair had met twice last year with Kontaveit winning both encounters. One was at the U.S. Open in straight sets. The entire encounter lasted for almost two hours. Kontaveit served up three aces and committed seven double faults. Both the players rescued six out of nine break points each.

Kontaveit started off the match with a slow pace and dropped her serve early on to give her opponent a 2-1 lead. But the Estonian grabbed the momentum and fought back to level the scores as 2-2. Kontaveit saved another break point in the next game and proved herself as the better player by the end of the set. The Estonian pulled ahead to seal the set 6-3.

Jil Teichmann produced an excellent fight back and made it as a different story in set two. The Swiss player completely outclassed her opponent to take an early 3-0 lead and never looked back. Teichmann broke twice and fended off everything Kontaveit tried. While the Estonian committed 22 unforced errors, Teichmann made just six. The Swiss ace turned the match upside down by securing the second set 6-1.

Kontaveit was seen worried as nothing really worked out well for her in the second set. However, she stepped up and played an attacking game in the decider set. Kontaveit cruised to a 5-2 lead by breaking Teichmann’s second serve. The Estonian held her serve and nearly took a protracted eighth game. Despite Teichmann holding on to her serve, Kontaveit took complete control with her serve in the very next game. Finally, Kontaveit closed it out as 6-3 with ease.

Anett Kontaveit will face either Marketa Vondrousova of Czech Republic or Romanian Sorana Cirstea in round 2. Kontaveit and Vondrousova have met thrice before, with the record in favour of the Czech player as 2-1. But in the case of Cirstea, the record is one-sided as Kontaveit has won all five of their previous encounters.