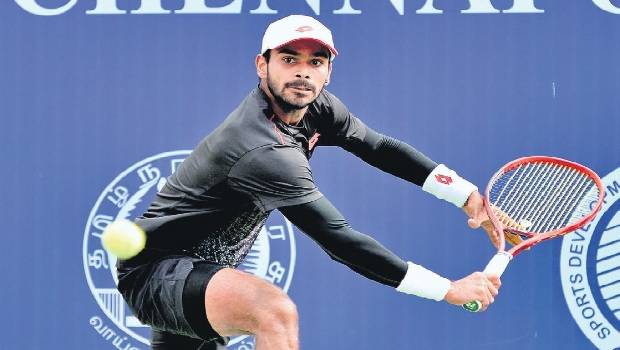 Sumit Nagal in the ongoing Argentina Open 2021 arguably clinched his biggest career win. He defeated World No. 22 Cristian Garin in straight sets and stunned the world. The game went on for a duration of close to 2 hours and saw a final score of 6-4, 6-3. With this win Nagal now moves on to the quarter-finals of the tournament where he will face World No. 42 Albert Ramos Viñolas.

The Indian ranks 150 but that has not stopped him from making fiery performances at the Argentina Open 2021. This is Nagal’s first-ever victory against a Top 50 player in his career. Despite both players having similar first serves, Nagal outclassed the Chilean on his second service. Nagal won 10 of his 18 points from the second service while his opponent managed to win only 7 of 22 points. This in return saw him capitalizing on breakpoints better as he won 7 of 19 breakpoints while Garin was able to take 4 of his 7 break point opportunities.

Well, this can be the Indian’s best win in his career it sure isn’t his best performance. That would go to his match against Roger Federer during the 2019 US Open. Nagal brought shivers amidst avid tennis fans as he won the first set against Federer. But the Swiss maestro came back strong in the next set and went on to win the game convincingly by 4-6, 6-1, 6-2, 6-4.

The reporters prior to his Australian Open debut this year asked him to highlight the feather he took from the Federer encounter to which he answered that he learned from the legend of how he understands and reads the game well and makes sure he does not make the same mistake again. It does seem Nagal has come a long way since playing against Federer as he showed the same level of performance against Cristian Garin.

Meanwhile, earlier this week Indian tennis star Sania Mirza also made a return to the WTA arena with a splendid win. With this, Sania moves on to the semi-finals of the Qatar Open alongside her partner Andreja Klepac. The Indo-Slovenian pair defeated the pairing of Gabriela Dabrowski and Anna Blinkova in straight sets. The pair will next face Demi Schuurs and Nicole Melichar in the semi-finals leg of the Qatar Open on Thursday.