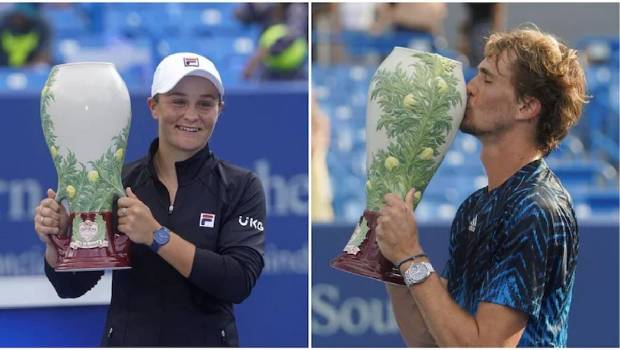 Alexander Zverev came from behind to defeat Stefanos Tsitsipas in the Semi-finals of the Men’s single event. Alexander Zverev clinched a 6-4, 3-6, 7-6 victory over Tsitsipas and sealed a spot in the finals of the Cincinnati Masters. Zverev has beaten the Greek Tsitsipas for the third time in their ninth meeting.
Alexander Zverev inspired everyone with his fighting spirit. He left the court to vomit in the final set and stepped up to give a fight back. Zverev overcame all his physical issues and battled for two hours and 41 minutes to win the game.

The Olympic gold medalist played exceptional tennis in the first set and dropped his level in the second. The German produced a stunning comeback in the third set to beat the Greek player. Zverev extended his winning streak to 10 matches.

Both players broke each other serves four times to stay in the battle. The German fired 42 winners and made 38 unforced errors in the game. Zverev thundered three aces to take a 6-5 lead in the decider and went on five for five on first serves in the tie-break. Zverev will clash with Andrey Rublev in the ninth Masters 1000 final.

Jil Teichmann stunned Karolina Pliskovato to reach the final of the 2021 ATP Cincinnati Masters. Teichmann beat the No 5 seed Karolina Pliskova with a 6-2, 6-4striaght sets win and advanced to the championship match. Jil Teichmann claimed the important win to play in the biggest WTA Women’s singles final of her career.
The 24-year-old wildcard Teichmann took one hour and 22 minutes to beat the former Wimbledon runner-up of the Czech Republic. Teichmann tasted her second Top 5 win of the week by beating the 2016 Cincinnati champion.

Both played well and had equal success on their first serves. Teichmann took charge from the second-service points and won 59 percent of those. Teichmann continued the momentum to convert four of her nine break-points. She carved a slice that forced Pliskova to make a netted error. Teichmann served to win a crucial triple break-point at 3-2 in the second set of the game.

Jil Teichmann has made it 4-0 against Top 10 players this season. Earlier, she made her biggest career win by defeating the top-seed Naomi Osaka in the round of 16. Teichmann won the quarterfinal against the Olympic gold medalist Belinda Bencic. Jil Teichmann will battle with the World no 1 Ashleigh Barty for the Women’s singles title.