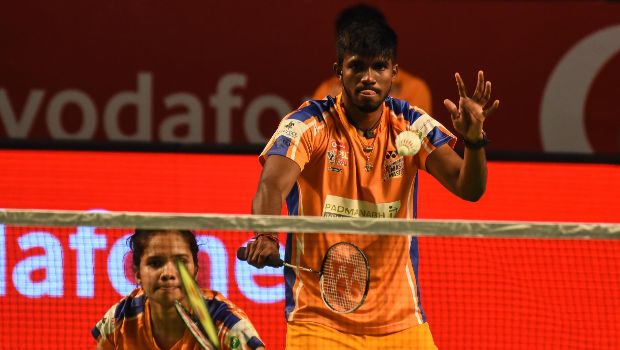 The Commonwealth Games champions Satwiksairaj and Chirag Shetty stormed into the Malaysia Open Super 1000 tournament’s quarter-finals after outplaying All England Open champions Muhammad Shohibul Fikri and Bagas Maulana. Though the world no.5 Indian pair secured the win in straight games, it was not a straightforward or easy win as they survived a stiff test against the Indonesian pair. The Indian duo recorded their third straight win on the tour over Fikri and Maulana, who is ranked no.11 in the men’s doubles chart.

Satwik and Chirag produced a clinical performance to take the first game 21-19. The second game was even harder and tighter as the Indonesian pair delivered all their skills to take the game very deep. But the top Indian pair held their nerve to deny a decider and clinched victory by 22-20. The 7th seed pair are giving their best to play in top gear in the season-opening tournament in Kuala Lumpur.

Satwiksairaj and Chirag will face Liu Yu Chen and Ou Xuan Yi of China in the quarter-finals on Friday (January 13). The Chinese pair ranked No. 6, defeated 2022 Badminton World doubles champions Aaron Chia and Soh Wooi Yik of Malaysia at the Axiata Arena.

Notably, the Malaysian pair had been a thorn in India’s flesh, having beaten Satwik and Chirag four times in 2022. The Indian pair will aim to go all the way and clinch the Malaysian Open title after having made a strong start to the tournament. The Indian duo had a memorable 2022 season in which they won the India Open, Thomas Cup, Commonwealth Games gold medal, World Championships bronze medal, and French Open.

Earlier in the day, India’s ace shuttler HS Prannoy sealed a spot in the quarterfinals after edging past Indonesia’s Chico Aura Dwi Wardoyo 21-9, 15-21, 21-16. Prannoy gave his 100 percent and used all his experience to secure a crucial win in a grueling contest that went on for an hour and four minutes.

The 30-year-old Indian started well and continued to dominate as the game progressed, winning the first game with ease. But the Indonesian produced a brilliant comeback to claim the second game 21-15 to force the decider. Both players attempted to outwit each other with crosscourt smashes in the decider. However, Prannoy took a five-point lead and went on to win the match. Today, Prannoy will face Japan’s Kodai Naraoka in the quarter-finals.