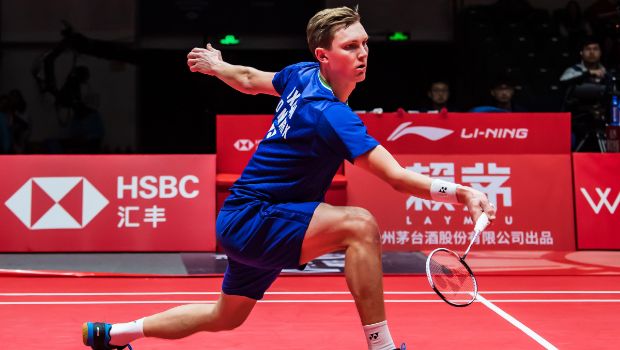 Olympic champion Viktor Axelsen produced a dominating performance to beat Japan’s Kodai Naraoka in the final of the Malaysia Open 2023. The Danish star claimed the men’s singles title by outgunning Naraoka in just 40 minutes at the Axiata Arena on Sunday. Axelsen displayed a top form of play in Kuala Lumpur to clinch his first trophy of the year, beating the Japanese rising star in straight games 21-6, 21-15. It was Axelsen’s ninth consecutive final in BWF Super 1000 level tournaments, a new record. The Danish shuttler secured his eighth title in the top-tier level series.

The world’s no.1 shuttler wasted no time in the first game as he immediately went on the offensive and played an attacking game. Axelsen continued to trouble the 21-year-old young opponent with his signature pinpoint smashes. The defenseless Japanese player had no answer to Axelsen’s smashes and quickly lost the opener.

The Danish top seed then kept up the pressure in the second game against a visibly exhausted opponent to clinch the win without any struggle. Axelsen conceded fatigue may have been a factor in the match, with Naraoka having played a mammoth 113-minute semi-final just a day earlier. Axelsen has been badminton’s standout performer over the last year, winning eight titles in 2022 including the All-England and World Championships.

After defending his title successfully, Axelsen told reporters that Naraoka looked stiff-legged due to the long matches he has played and that was a good advantage for him in the final. The Danish shuttler admitted that he just tried to play consistently at a high pace, and not give him many chances. If Naraoka wanted to win, he had to work really hard.

He also stated that there were many strong players capable of overtaking him, though he declined to give names. Axelsen concluded that for him it is just about minding his own business, trying to play well, and keep improving.