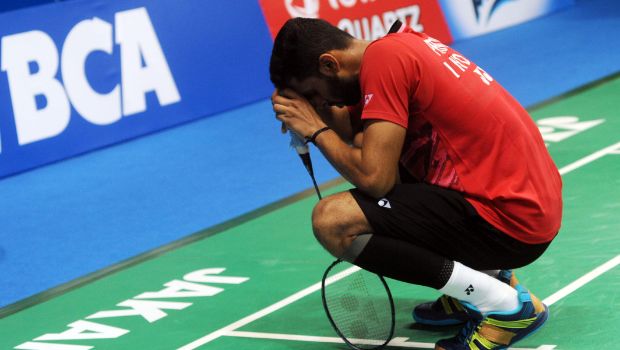 Indian shuttler HS Prannoy suffered his second defeat in the BWF World Tour Finals 2022 against Lu Guang Zu of China in Group A of the men’s singles match in Bangkok. Prannoy, ranked 12th in the world badminton rankings, started the match with his right knee heavily strapped. Though the Indian was comfortably dictating in the third game, he failed to maintain the momentum and ultimately lost 21-23, 21-17, and 19-21 against Guang Zu. India’s ace shuttler made the contest exciting and gave his best in an hour and 24 minutes battle.

In the year-ending mega tournament, Prannoy lost his first match against Japanese Kodai Naraoka on Wednesday. Even if the third-seeded Indian badminton player defeats Tokyo 2020 winner Viktor Axelsen in his final group match today, Prannoy will not able to advance to the semi-finals as he had suffered back-to-back losses. Only two players will advance to the final four from the two groups.

Prannoy and Guang Zu played lengthy rallies in the first game. World no.17 Chinese shuttler produced a brilliant performance to extend the lead to 13-10. But Prannoy caught up with him at 15-15 and mounted a comeback to take a lead at 19-16. Prannoy failed to continue with the rhythm and also to keep up the pressure on his opponent. Eventually, the Indian gave up seven of the final nine points.

The 30-year-old Prannoy was down 10-11 in the second game, falling behind once more. But he recovered in quick time and smashed victories close to the lines to force a decider.

After falling behind 10-14 in the decider game, Prannoy produced an excellent comeback and went on to take a lead at 19-18. However, the Indian player made a few unforced errors in the crucial moments of the contest, allowing Guang Zu to score the final three points and win the match.

This was Prannoy’s second defeat against the 26-year-old Chinese shuttler. Earlier, Guang Zu defeated Prannoy at the French Open round of 16 in October. Friday’s last group match pits World no.1 Viktor Axelsen of Denmark against Prannoy. Prannoy will be hoping to end his campaign with a victory.

Olympic medalist PV Sindhu was forced to withdraw from the BWF World Tour Finals due to an ankle injury. The top-seeded shuttler won the women’s singles title in 2018 and is the only player from India to take home a medal in the history of the tournament.

Chess: 12-year-old prodigy eager to get India back on the map
No handshakes, only Namaste at All England: PV Sindhu
Chess Olympiad 2022: Uzbekistan won gold in the Open section