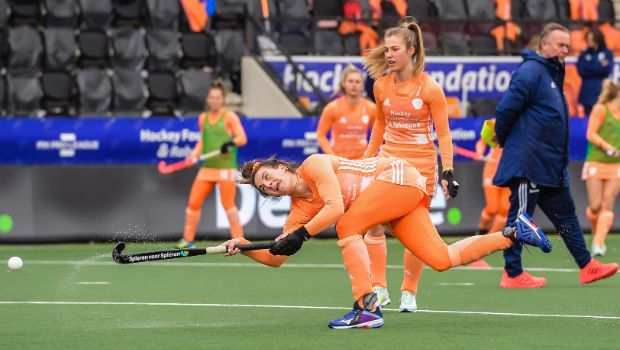 The Indian Women’s Hockey team and England Women produced a high-voltage game in the tournament opener at the prestigious FIH Women’s Hockey World Cup Spain and Netherlands 2022. After battling it hard and giving their 100 percent, both teams failed to score a winner in their first Pool B thriller at the Wagener Stadium, Amstelveen. The English forward Isabelle Petter and India forward Vandana Katariya scored a goal each for their respective teams. Though there was not a winner, both teams played well to add on a crucial point on the pool table.

Both teams made a rollicking start and pushed each other hard for ball possession. India and England played some brilliant hockey to create space in each other’s circle. Women in blue got a Penalty Corner in the very first minute, but they failed to make most of it. Very soon, England played a shot destined to go into the bottom corner, but India goalkeeper Savita Punia made a huge save by going down to her right.
England drew the first blood in the 9th minute, a beautiful field goal with some slick passing and a sensational finish from Petter, who sent the ball high into the top of the net. India looked to hit back immediately but managed to hit only the woodwork from the penalty corner. India started the second quarter brightly with a Penalty Corner, but the Indian women had nothing to show off on the scoreboard.

Women in blue who worked on their strategies to create chances, were awarded with a Penalty Corner. But India missed the goal by inches as Gurjit Kaur’s drag-flick bounced off the goal post. However, India remained calm and continued to play an attacking game. India got yet another Penalty Corner for foot-foul in the 28th minute, this time Katariya did well to pick up a rebound off England goalkeeper Maddie Hinge’s pads. India’s experienced striker cleverly deflected the ball past Hinge to earn the equalizer.

Indian women continued to put pressure on England with frequent attacks in the circle. But England’s defense was rock solid with their experienced goalie Hinge, who produced some brilliant saves and guided her team’s defense from the back.

Though England created a couple of chances, they were off target. India could have extended the lead in the 56th minute, but unfortunately, Sharmila failed to get her stick on the ball and missed out a great opportunity. India will play China in their second match on 5th July followed by a match against New Zealand on 7th July in Amstelveen.