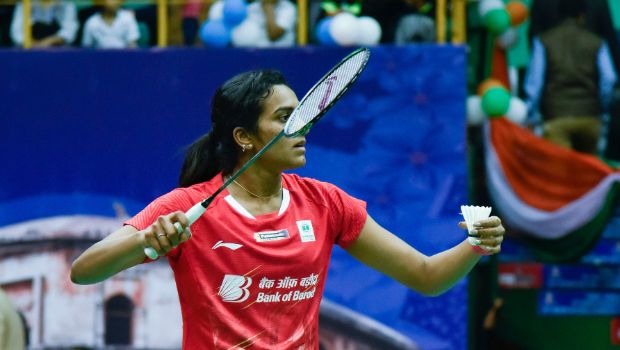 The six-day World Tour Super 750 tournament is being organized by the Badminton World Federation. PV Sindhu will look out to iron her flaws in the French Open. PV Sindhu aims for a strong comeback to win the French Open title. Sindhu, a double Olympic medalist, was a bit sluggish at the Denmark Open.

She lost in the quarter-finals to An Seyoung from Korea. Seyoung never allowed the world champion to play her attacking game at the Denmark Open. The 26-year-old Indian star hopes to get back her aggressive play and also strengthen her defense.

P V Sindhu sailed into the second round of the French Open Super 750 badminton tournament. Sindhu defeated Denmark’s Julie Dewall Jakobsen 21-15, 21-18 in women’s singles. The 23-year-old Dewall Jakobsen, who did not have more experience of playing at the highest level, found it difficult to match up with the level of the Reigning champion. World No. 7 Sindhu was too good to handle her opponent and won it in straight games.

The third-seeded Indian will clash with Dane Line Christophersen in the next round. London Olympics bronze medalist Saina, who suffered a groin injury at Uber Cup final, retired after lagging 11-21, 2-9 against Japanese Sayaka Takahashi.

Indian player Sameer Verma started his French Open campaign with a win in men’s singles. Sameer Verma progressed to the second round of the French Open Super 750 tournament after securing a straight-game win over Lee Dong Keun. The 25-year-old Indian sensation defeated the Korean 21-14, 21-12 in 54 minutes in the opening round. Sameer sealed his first win against Dong Keun, having lost to him twice in the past.

The World No. 21 player was in total control throughout the match. Barring a few moments midway through the first game, Sameer led his opponent for the entire duration of the game. Sameer Verma, who reached the quarter-finals at the Denmark Open last week, continued his superb form to win with ease.

Sameer Verma stunned world No. 3, Anders Antonsen, at the Denmark Open second round last week. But he retired in the quarter-finals due to a calf muscle injury. Sameer Verma will be up against Shesar Hiren Rhustavito in the second round. The world’s No. 20 Indonesian player had beaten Sameer at the Thai Open earlier this year.
Another Indian player Kidambi Srikanth suffered a heartbreaking defeat against world no.1 Kento Momota in the second round in Paris. The Rio quarterfinalist played his full strength to match the Japanese top-seed. Srikanth also held a two-point lead in the decider game but unfortunately ended up losing the match in 79-minutes.