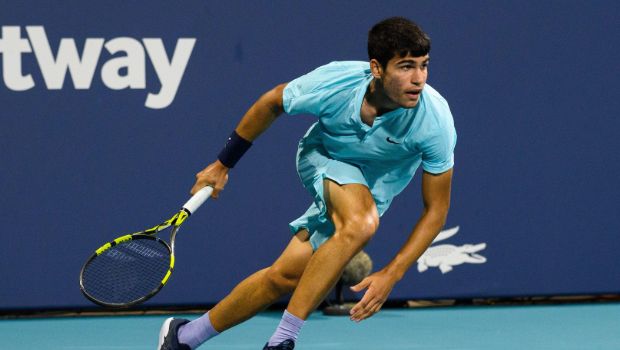 Carlos Alcaraz defeated Andy Murray 6-3, 6-4 in straight sets in Vienna. Carlos Alcaraz put both arms in the air and nodded his head in happiness for his performance. The 18-year-old teenager had earned his revenge on the British player. The Spaniard, who lost to the former World No.1 Murray in Indian Wells earlier this month, defeated him to reach the quarter-finals of the Erste Bank Open. Alcaraz advanced to his first ATP 500 quarter-final of his career after earning an outstanding victory. The NextGen ATP star will be up against third seed Matteo Berrettini in the quarter-finals.

Alcaraz delivered all his skills and fighting spirit to surpass Murray in a 2-hour 6-minute battle. The game featured 25 breakpoints and seven service breaks. Alcaraz is the second-youngest player to defeat Murray. Borna Coric was the first youngest player to do so when he beat Murray in the 2015 Dubai Tennis Championships. Alcaraz, the youngest player in the top 100, had already knocked out British No.2 Dan Evans in his opening match.

Andy Murray is a two-time Vienna champion with victories in 2014 and 2016. Murray won his last nine consecutive matches at the tournament, but finally received an end from the hands of rising Spanish teenager Carlos Alcaraz in straight sets. Alcaraz hit 27 winners to put an end card for Murray’s winning streak of nine matches.

Carlos Alcaraz dominated the game with 62 percent of first serves. Alcaraz gave Murray a serious workout to make an early breakthrough in the opening game. The match swayed from one game to the next with both players exchanging the points. The Teenager put Murray under pressure by breaking his serve immediately.

Alcaraz was intent on punishing the ball and controlled rallies, especially on points played behind the second serve. Murray required six break points to level it up for 2-2. Murray find it difficult to hang on to his serve as Alcaraz struck back with his fifth breakpoint and took a 4-2 lead.

The young Spaniard went on to close out the first set with a further break of serve after 65 minutes. Andy Murray looked comfortable with a 3-1 lead in the second set. But Alcaraz played his best to gain momentum and came back strong into the game. After making it 4-4, the Spaniard held his nerves and then took his chance to break Murray’s serve. Finally, he ended the rally with a booming crosscourt forehand winner.

Clevinger of Padres is set to miss the entire 2021 season due to Tommy John surgery
BWF reschedules 2021 World Championships to Nov-Dec, avoids clash with Olympics
Italy beats the United States to reach the Davis Cup semi-finals