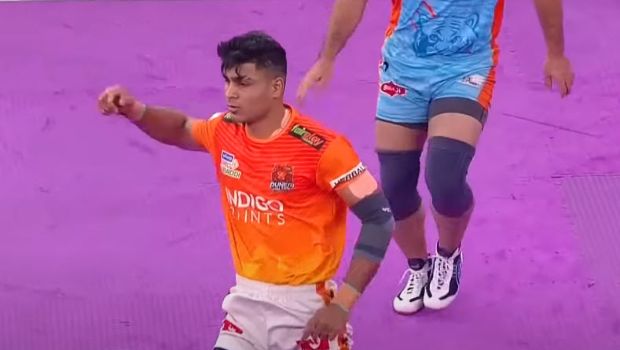 Fans will be witnessing two terrific games of the Pro Kabaddi League tonight at Gachibowli Indoor Stadium, Hyderabad. Puneri Paltan hopes to continue with their winning momentum against Gujarat Giants while out-of-form Haryana Steelers would be looking for a boosting victory against U Mumba. The final-minute thriller has become a habit of the Pro Kabaddi League matches and players make them more exciting to watch.

Puneri Paltan is placed comfortably at the top of the points table standings (69 points) with 12 wins and four losses from 18 games. Meanwhile, Gujarat Giants are currently placed in the 11th position (36 points) with just five wins and 11 losses from 17 games. Puneri Paltans have been victorious in their last five games and are all set to enter the playoffs in style. The Pune-based side has been unstoppable on the mat and would like to continue with their superb form to win the title this season. On the other side, the Giants have lost their previous five battles which eventually pushed them to the second last position in the table.

Puneri Paltan registered a dominating 38-25 win over Telugu Titans in their previous encounter. They will eye to continue their winning streak against a depleted Gujarat side. The Giants are having a horrible season and are failing to secure wins as a team. The Giants played well in their previous fixture against Tamil Thalaivas but eventually lost the game by a narrow margin of three points. The Giants have a tough task ahead as they face table toppers Paltan, who is in red-hot form.

Puneri Paltan is playing as a combined unit with both raid and defense departments contributing equally in all their matches. Raiders Aslam Inamdar and Pankaj Mohite are instrumental in Paltans’ wins and contribute well with their raiding skills. Puneri Paltan’s defense is led by its skipper Fazel Atrachali and Sanket Sawant gives him good support. Both defenders show some great signs and pick up points with ease.

Parteek Dahiya was Giants’ lone warrior in the last match. No other raider or defender looked threatening the opponent. Chandran Ranjit will be the player to watch out for. The Giants would like to bring back their winning days in the battle against Paltan. Though it is not going to be easy, some strategic planning could help them win the contest. However, undoubtedly, Puneri Paltan will be the favorite to win the clash.