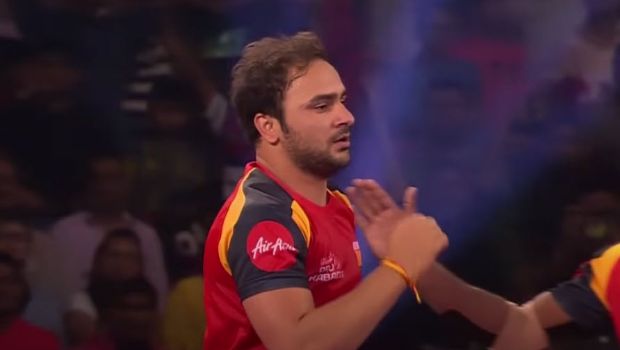 Dabang Delhi sealed their playoff spot with a narrow win 26-23 over the table topper Patna Pirates. Dabang Delhi needed at-least a tie to ensure a place in the playoffs. They managed to secure a victory and become the third team to enter the playoffs in the PKL season 8. Despite playing with a second-string side, Patna Pirates gave Delhi a strong challenge and stayed in the contest till the very end. The Pirates started the game strongly before Delhi settled down.

After trading points at the start, it was a neck-to-neck contest till the final seconds. For Delhi, Vijay Malik was brilliant with his raids and scored a game-high 7 points. Manjeet Chillar led the Delhi defense and was effective on the mat with a High 5. Delhi players puffed and huffed to seal a much-needed victory.

The Pirates scored most of the points with their tackles. Shubham Shinde and Sourav Gulia were the stars in Patna’s defense. While Shinde picked up a High 5, Gulia and Shadloui Chianeh earned four tackle points each. Patna Pirates started on a good note by taking an early lead. However, Delhi produced a good fight back to catch up the lead. From thereon, the game went so tight and hard as both the teams matched up each other. Dabang Delhi finished the first-half with a narrow lead of 14-12.

Delhi continued to lead with four points in the second-half. Delhi smelled an all-out opportunity, but their raider Neeraj Narwal failed to deliver and was super-tackled by Shinde. It helped the Pirates to cut down the lead. Patna defenders made it difficult for the Delhi raiders. However, Delhi made good strategy and worked it out perfectly. Delhi defenders gave Patna raiders a taste of their own medicine.

Veteran Chillar and Krishan combined well to score 9 tackle points. With just five-minutes remaining in the clock, Delhi led the game marginally by two points. However, the Pirates tackled Sandeep Narwal brilliantly and a crucial raid point from Rohit helped Patna to level the scores at 23-23.

Vijay held his nerve and kept his cool to pick up two crucial raid points in the dying minutes. Delhi defenders successfully tackled Rohit when he came for a do-or-die raid. Dabang Delhi successfully took a two-point lead and ended the game with a win. Delhi would eye to reach the top two spot in the table.