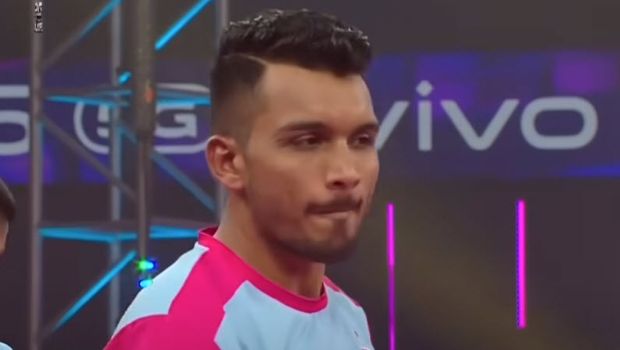 Jaipur Pink Panthers registered a comprehensive 35-30 win over Patna Pirates in Match 7 of the Pro Kabaddi League (PKL) season 9 at the Shree Kanteerava Indoor Stadium in Bengaluru on Sunday. One of the finest raiders in the league Arjun Deshwal put up a performance for ages and helped his team to register their first win. Deshwal finished the match with 17 points while Rohit Gulia emerged as the best player for the Pirates with 11 points.

Bengaluru Bulls are on top of the standings with two wins (10 points) from as many matches. Jaipur Pink Panthers are in the second spot with 6 points and defending champion Dabang Delhi is at three with 5 points. After opening their campaign with a tie against Puneri Paltan, Patna Pirates has lost its second match of the season. However, the men in green walked away with a point as they kept the margin of defeat under 7 points.

Rohit Gulia chipped in with a couple of raids as the Pirates inched ahead at 6-3 in the 8th minute of the game. But, Deshwal helped Jaipur level the scores at 7-7 through a few fabulous raids. Moments later, Patna was on the verge of being ALL OUT, but Sachin was brilliant to affect a raid and ensured that his team stayed in the lead with a score of 10-9. However, the Panthers eventually inflicted an ALL-OUT and gained the lead at 12-11.

Deshwal produced another two-point raid and Panther’s defender Ankush also made a crucial tackle to keep Sachin out of the mat. The panthers played well to attain a massive lead of 17-12 in the 18th minute. The Pink Panthers continued with the momentum and went into the break with a four-point lead. Deshwal was brilliant and registered a Super 10. But Rahul Chaudhari struggled yet again to earn a single point from three raids.

Patna gifted points as Ajith Kumar took out Neeraj Kumar and Gulia who oddly charged at him very close to the midline. A few moments later, Deshwal produced a super raid and took out three Patna men. Patna was All OUT yet again as Sunil Kumar brought down Vishwas. The Panthers had a 10-point advantage with their pure dominance.

Sachin effected a fantastic raid in the 37th minute, but the Pirates failed to pick up points consistently and allowed Jaipur to hold on to their lead at 34-26. The Panthers’ raiders stopped taking risks and secured a comprehensive victory.