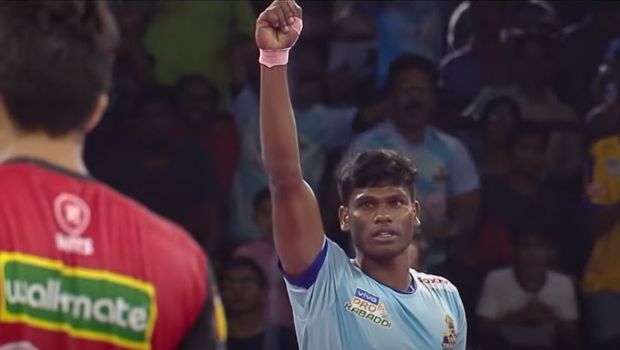 After more than two months of non-stop action, Pro Kabaddi League (PKL) season 9 has its two finalists and they are the two best teams in the league phase of the tournament. Jaipur Pink Panthers will play Puneri Paltan in the grand finale on Saturday, December 17. The Pink Panthers produced a sensational defensive performance to crush Bengaluru Bulls 49-29 in a one-sided contest. In the second semi-final, Puneri Paltan, despite trailing for large periods of the match, produced a stunning comeback to edge past Tamil Thalaivas 39-37 in a thriller.

Sahul Kumar emerged as the best player for the Panthers with 10 tackle points. Ajith Kumar led the way with 13 points, overshadowing Arjun Deshwal and Rahul Chaudhari in the raiding department. It was the Bulls’ raiding unit that had picked up 30 points in their eliminator against Dabang Delhi. But it was never going easy for them against the best defensive unit of PKL 9.

Bharat Hooda, the Bulls’ young raider, spent more than half of the match off-court. Bharat’s raids were from the left, but from his right corner position, Sahul kept gobbling him up. It was one of the most thrilling individual performances of the season. Ankle holds, back holds, thigh holds, it had everything in it, and Sahul lifted Sachin Narwal on his shoulder for his ninth point.

The Pink Panthers’ defensive unit was a frightening prospect for any opponent this season. Now, with Sahul coming to the party, it would be a very tough battle for Paltan in the summit clash.

In the second match, Tamil Thalaivas finished the first half with a six-point lead. Paltan needed a player to deliver big, especially in the absence of their two raiding stars Aslam Inamdar and Mohit Goyat. Pankaj Mohite came up with a sensational 16-point haul that kept them within touching distance of the Thalaivas.

Mohammad Nabibakhsh emerged as the star towards the end. Though the Iranian picked up only 6 points, those came in crucial moments to tilt the game in Paltan’s favor. Puneri inflicted a late all-out on the Thalaivas, which gave them a five-point lead, and then they managed the game expertly to secure a win.