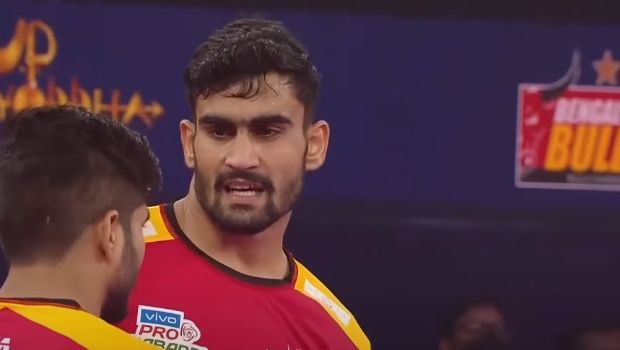 The Pro Kabaddi League (PKL) season 9 after two months of nail-biting performances has finally reached the playoffs. Kabaddi fans witnessed exciting thrillers as there was non-stop action on the mat between 12 teams and now six teams have made it to the main stage of the tournament. Jaipur Pink Panthers, Puneri Paltan, Tamil Thaliavas, Bengaluru Bulls, Dabang Delhi, and UP Yoddhas have qualified for the playoffs in the PKL 9. Jaipur Pink Panthers and Puneri Paltan enter the semifinals directly as they finished the league stage as the top-two teams in the points table.

The remaining four teams will take each other on in two Eliminator ties to seal a berth in the semis. The kabaddi fever will reach its crescendo on Tuesday (December 13) with two mouth-watering matches on the cards. Dabang Delhi will face off against the Bengaluru Bulls in Eliminator 1, while Tamil Thalaivas will take on UP Yoddhas in Eliminator 2 at the Dome, NSCI SVP Stadium in Mumbai.

Jaipur Pink Panthers will lock horns with the winner of the match between Bengaluru Bulls and Dabang Delhi, while the Puneri Paltan will be up against the winner of the battle between UP Yoddhas and Tamil Thalaivas in the Semi-finals on Thursday, 15th December 2022. The grand finale will be held on Saturday (December 17) at the NSCI Dome in Mumbai.

Bengaluru Bulls will be holding a slight edge as they have won both encounters against Dabang Delhi in PKL 9. Bharat was the star raider for the Bulls in both battles and single-handedly won the match after trailing by more than 10 points in the first half.

Dabang Delhi failed to hold on to the lead and lost two close encounters despite leading by a good margin at one point. As always Delhi’s defense did not stand up to deliver well in crucial situations which cost them the match. The combo of Amit Hooda and Sandeep Dhull should look to minimize the threat of Bharat.

Tamil Thalaivas will be hoping to give their best as they have qualified for the playoffs for the first time in PKL history. UP Yoddhas will make the battle a tough one as they have been the most consistent side in PKL.

UP Yoddhas are into the playoffs for the third successive time but are yet to reach the final even once. Though the Thalaivas have an inexperienced squad, they have players who can rise to the occasion.