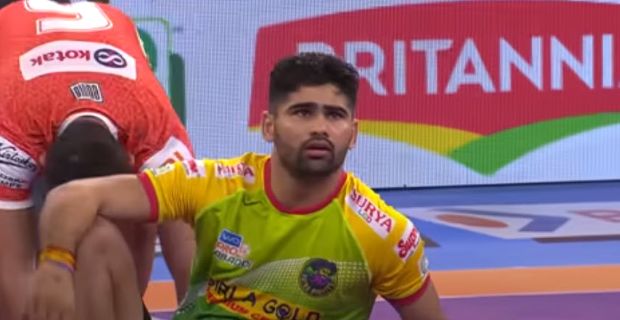 Pro Kabbadi League action continued in Bengaluru with a battle between two in-form teams, UP Yoddha and Puneri Paltan. Many experts and fans expected UP Yoddha to win the game and rise to the second spot on the points table. However, UP Yoddha raiders and defenders failed to deliver up to the expectation. Finally, Yoddha ended on a losing note.

Meanwhile, Puneri Paltan raced on a Super 10 from young raider Aslam Inamdar. Inamdar finished with 12 points which included four bonuses and three tackles. Mohit Goyat gave excellent support to Inamdar by scoring 14 points in 13 raids. Defender Abhinesh Nadarajan fell one short of a High 5. The Paltans went on to register a 44-38 win over UP Yoddha.

Despite having the Record Breaker raider Pardeep Narwal in the playing seven, UP Yoddha experienced a defeat. Pardeep Narwal who always displays clever raids failed to impress much as he managed to score only six points. Though Surender Gill scored a game-high 16 points for UP Yoddha, it was not enough to defeat the Paltans. All his efforts went in vain.

The Paltans started aggressively from the word go and inflicted the first all-out inside eight minutes. At one stage, Puneri Paltans led the game by 10 points (15-5), but Yoddha raiders fought well and made a brilliant comeback in the next few minutes. They went on to complete an all-out on Puneri Paltan in the 19th minute. The score was 21-18 at half-time in favor of Puneri Paltan.

All expected Pardeep Narwal and his men to dominate and take a lead in the second half. But they failed to do the same as the Paltan’s defense played strong like a rock and never allowed Yoddha to earn raid points. An outstanding defense play from the Paltans inflicted another all-out on UP Yoddha and extended their lead 11 points. The Pune team then led by 31-20 in the 27th minute.

Though UP Yoddha tried their best in the last 13 minutes of the play, they failed to deliver well and beat the Paltan. Finally, UP Yoddha managed to take one point after reducing the deficit to less than eight points.

Tonight, Patna Pirates will lock horns with Tamil Thalaivas. The Pirates had a good run in their last five games with three wins and two defeats. However, they have secured seven wins from 11 games. Meanwhile, Tamil Thalaivas, have three wins and as many defeats, apart from six draws from 12 games. Thalaivas are in the tenth spot with 34 points.