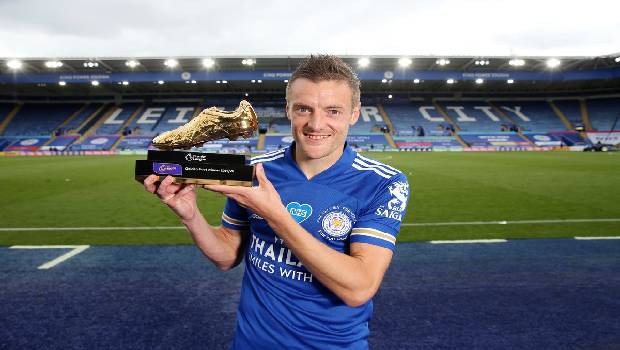 Leicester City made a remarkable win against Manchester City by 5-2 in the Etihad Stadium. Leicester’s legend Jamie Vardy contributed heavily in his team’s resounding victory as he scored his career’s second hat-trick. The Foxes win from this weekend’s game places them at the top of the Premier League. Leicester with this victory has now handed Manchester City their first defeat in this current season.
At the start of the game, Riyad Mahrez scored the first goal against his former team and gave the lead for Manchester City at the fourth minute. Riyad was one of the best for his team, apart from his stunning goal Riyad posed a great threat throughout the game at the left flank.

The game was leveled at the 37th minute when Vardy scored his first goal from a penalty. He went on to score two more goals topping the goal scorers list for this season. He shares the No.1 position with Everton’s Dominic Calvert-Lewin as both have now scored 5 goals each for their club. Leicester’s lead grew over the period of the game with James Maddison’s screamer from long-range and Tieleman’s penalty kick at 88th minute.

Manchester City’s debutant Nathan Ake scored his first goal for his club at the 84th minute from an accurate cross from Riyad Mahrez. Despite scoring this game it will not be a memorable outing in his career. Ake was also booked a yellow card at the 60th minute for a foul. Leicester City with an all-around performance from its players won the game with a three-goal advantage. Leicester with this unthinkable victory has also become the first club to score 5 goals against a team managed by the Pep Guardiola. As questions are being raised on Manchester City’s poor defense play Guardiola is now pushed back to go to the drawing board and find a solution for his team’s poor performance before next weekend’s game against newly-promoted Leeds United.

Manchester City despite conceding 5 goals their goalkeeper Ederson cannot be blamed for his team’s blunder since 3 goals were from penalty kicks and the other two being a clear display of excellence that was tough to defend by him. Leicester with the winning momentum will face West Ham on October 4 and look forward to extending its lead in the table.