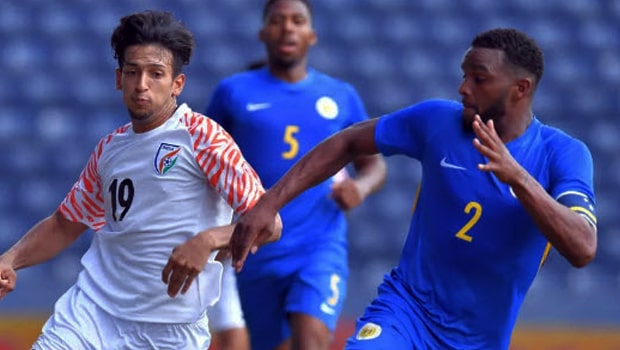 Indian football’s Igor Stimac-era got off to a rather disappointing start after a 3-1 loss to Curacao in the King’s Cup on Wednesday. It was the Croatian’s first match at the helm for the Blue Tigers and one which he won’t look back upon fondly. All the goals came in the first-half before Curacao took the foot off the gas in the second since they were happy to protect their advantage. Even though India did find the back of the net from the penalty spot once, there was no evading the disappointing result. Here are five talking points that have emerged after the Blue Tigers’ loss to the Dutch Caribbean island nation.

Sunil Chhetri is still the man to spearhead the frontline

Chhetri showed us why he’s India’s all-time leading goal-scorer against Curacao with a mature display that his teammates can learn from. Often the only attacker looking to press Curacao’s backline, Chhetri was a frustrated figure but would have been pleased to get his name on the scoresheet. It was apt that Chhetri scored the first goal of the Stimac era after clinically converting from the spot to halve the deficit. He’s still India’s biggest threat going forward and is the Blue Tigers’ best bet to come up with moments of magic in the future.

India’s defence in the opening period against Curacao was abysmal to put it mildly. The opposition looked like scoring every time they ventured into India’s half with none of the defenders managing to be tight to the attackers or get a tackle in. Bereft of any basic defensive organization and solidity, Stimac was forced into changes at the start of the second period. However, he’ll know that identifying key players who are capable of putting in a good shift at the heart of defence, will be pivotal to his chances of success with the Indian national team in the future.

Midfield needs to stamp their authority and be more aggressive

In hindsight, dropping Anirudh Thapa from midfield looks like it was a mistake and one which all but gave Curacao a free reign at the center of the park. Thapa was dropped for Brandon Fernandes, who’s known more for his attacking qualities than defensive diligence. Fernandes was rooted in the unfamiliar role of a deep-lying playmaker and didn’t enjoy the best of outings as Pronay Halder and the rest of India’s midfield options just kept chasing shadows. Moving forward, Thapa is a must for India’s midfield having previously demonstrated his ability to control the tempo of a game from the middle.

Despite the loss, India can take heart from the fact that plenty of new and exciting faces looked hungry for success. Debutant Sahal Abdul Samad was one of the few bright sparks for India and almost scored in the 5th minute. He earned India the penalty and also setup a good chance for Udanta Singh three minutes before the break. Chhetri had earlier told the media that Sahal is a bright talent and judging by his debut in national colours, the youngster has a bright future. Sahal, of course, is just one of several exciting youngsters who Stimac is looking to build this team around.

Stimac will need time to succeed

The former Croatian manager delivered on his promise of faster displays and enterprising gameplay, but the result wasn’t what he was looking for. That said, it’s important to put things into perspective and realize that he has been with the current group of players for a little over two weeks, making it difficult to completely implement his philosophy in such short notice. Not shy to try out new things, Stimac utilized various different formations during the course of the 90 minutes. However, overnight success isn’t something that’s fair to expect from someone who hasn’t even been in the job for a month now.