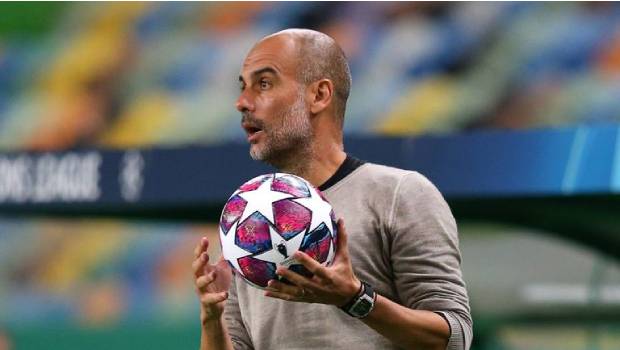 Pep Guardiola, Manchester City’s boss after his side won over Porto in the Champions League on Wednesday, he spoke about the future of Eric Garcia with Man City. During the game against Porto, the teenager played all 90 minutes of the game. Played at the Etihad Stadium the game resulted in a 3-1 win for the hosts.

When asked about Garcia after the match Guardiola said he knows that the Spaniard wants to leave but with some convincing, this year Pep is confident of making him stay at the club by extending his contract with them. Guardiola added that Garcia is a stable player and is happy with his performance.

Spain international Garcia is in the final year of his contract at City and was linked with a switch back to his boyhood club Barcelona it’s expected that Barcelona will try to bring him back to the Camp Nou either in January or next summer but Guardiola is keen to keep him in Manchester.

As the English giants prepare for a tough schedule of three away games in a duration of eight days Pep Guardiola agreed the sides increasing injury list is a concern for them. The win against Porto in the Champions League on Wednesday still ended on a slightly sour note due to a player’s injury. Fernandinho who came in as a substitute at the final moments of the match limped off the field and with a muscular injury is expected to miss 4 to 6 weeks. Manchester City’s new signing Nathan Ake due to a niggle in his groin missed Wednesday’s match.

Guardiola regarding his other injured players said Kevin and Laporte will start their training again on Thursday but is not sure how would it pan out. He added saying in three days they’ll be playing West Ham and then travel to France to play Marseille and then Sheffield which is physically so demanding on the players.

On the consequences due to the injuries Guardiola said they are honestly struggling a little bit and now to lose Fernandinho at the end of the game is another blow for them. He added by saying indeed they have replacement players and with some players coming back from the quarantine can ease a bit of the pressure off from Guardiola’s shoulder.