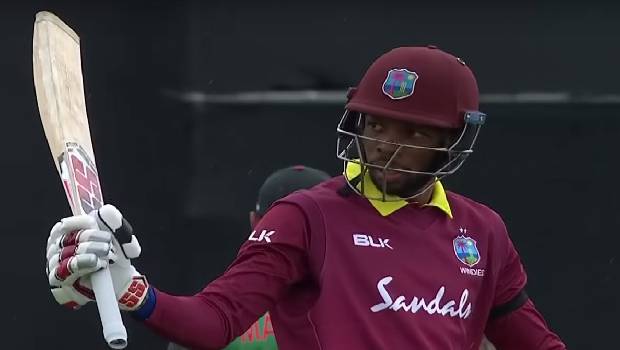 All-rounder Roston Chases’ quick 2-31 with his off-spin bowling Wednesday to help the West Indies record 7 wickets win over Afghanistan in a 1 day International.

Chase scored 94 off 115 balls and opener Shai Hope made an unbeaten 77 off 133 balls to direct West Indies to 197-3 in 46.3 overs. Both batsmen shared a 163-run 3rd wicket partnership and the 3 pronged Afghanistan spin attack as leg-spinner Rashid couldn’t get a wicket and conceded 43 runs off his 10 overs.

Chase attempted to reach his maiden ODI century however was clean bowled in the 44th over. Afghanistan, later being placed in to bat, tried a hard century between Ikram Alikhil and Rahmat Shah to get bowled out for 194 with multiple overs to spare.

Afghanistan is facilitating the West Indies in this northern Indian city for 3 ODIs, 3 T20s and a one-off test. The 2nd ODI will be played on Saturday at the same place. Afghanistan batsmen Rahmat and Alikhil hit 50 runs in a 111-run partnership before 45.2 overs.

Afghanistan lost openers Javed and Hazratullah with only 15 runs before Shah (61) and Alikhil (58) the innings. Alikhil was run out in a freak way that had finished his fifty with a single, however the ball was in wicketkeeper Hope’s gloves and still in play. Afghan made 35 runs earlier being run out by Jason and he claimed 2 more wickets each.