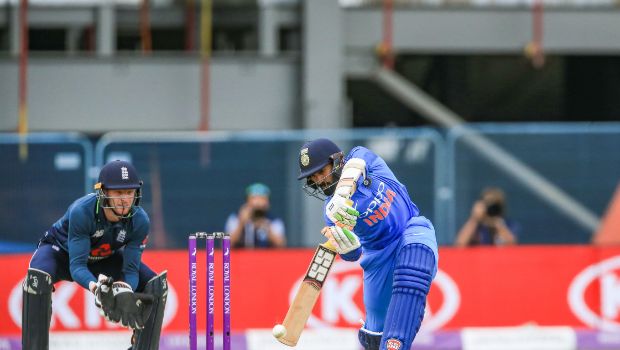 Rejuvenated Royal Challengers Bangalore registered a thrilling 4-wicket win over Rajasthan Royals at Wankhede Stadium. Dinesh Karthik once again turned out to be the hero for RCB with a scintillating 44-run knock off 23 balls against a quality RR bowling attack. Shahbaz Ahmed smashed some glorious shots during his 45-run innings and helped his team to outclass RR in the close encounter.

RR’s opener Yashasvi Jaiswal (4) yet again failed to give a solid start. Now it’s time for RR team management to take a big call. Jos Butler and Devdutt Padikkal looked solid and added 70-run for the second wicket. However, Harshal Patel struck in the 10th over to dismiss Padikkal on 37.

Very soon, Wanindu Hasaranga bagged RR skipper Sanju Samson for just 8-run. RCB bowlers executed their plan well and made it tough for the RR batters. Butler and Shimron Hetmyer (42) found it difficult to get the momentum and play big shots. However, both produced some power-hits towards the end to post a score of 169/3. Butler who remained unbeaten on70-run became the Orange Cap holder.

In response, RCB skipper Faf du Plessis (29) and opener Anuj Rawat (26) got RCB off to a good start but that was undone by them losing four wickets in the space of two overs. Virat Kohli was unlucky to get run out on just 6. Yuzvendra Chahal picked up two crucial wickets and was involved in the mega run out. Karthik and Ahmed added 67-runs off 33 balls to take the game away from RR. Finally, RCB ended up getting over the line.

"Nowhere Near Kapil Dev" Hardik Pandya Slams Michael Holding's Jibe After Routing England
Due to Bangladesh players strike, their tour to India is in doubt
ICC World Cup 2019: India vs England, key battles that will determine the fate of the match