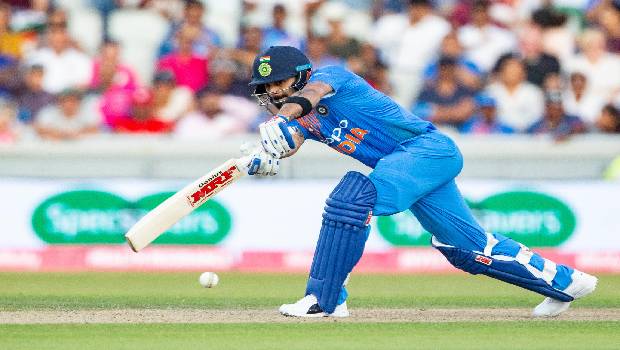 Royal Challengers Bangalore defeated Punjab Kings by six runs at the Sharjah Cricket Stadium. Royal Challengers sealed their spot in the Play-offs after a deserved win. Punjab Kings are at the verge of exit after losing the match by a small margin. Punjab Kings middle-order batsmen failed to live up to the expectation and chase the target. Shahrukh Khan’s little cameo at the end was not enough to take his team home.

After electing to bat, RCB had a decent start. Skipper Virat Kohli and Devdutt Padikkal scored runs quickly at a run rate of 7.55. Moises Henriques brought Punjab into the game by dismissing Kohli (25) and Dan Christian in consecutive deliveries. Glenn Maxwell starred with the bat once again and rained sixes. He went back to the dressing room after scoring a blistering 57.

Sarfaraz Khan made a fine throw to run out AB de Villiers, who was batting well at 23 runs. Punjab bowlers bowled well towards the end and restricted RCB for 164/7. Both Henriques and Mohammed Shami picked up three wickets each.
Chasing a challenging total, Mayank Agarwal and Captain KL Rahul gave an excellent start to their side. Both switched 91 runs for the first wicket. While Mayank scored his fifty, KL Rahul scored 39. Aiden Markram failed to score big and went back for 20 runs.