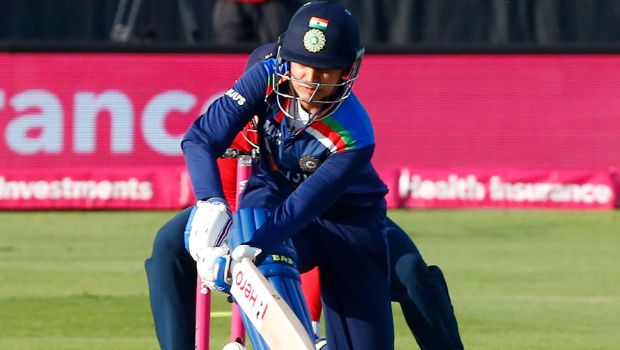 India women thrashed Barbados women by 100 runs in a Group A match at Edgbaston in Birmingham. With a commanding win, women in blue became the second team in Group A to reach the semis at the Commonwealth Games 2022. Chasing a target of 163, Barbados women were restricted to 62/8 in 20 overs. Barbados was never in the chase and crumbled against Renuka Singh’s breathtaking bowling display. Renuka scalped four wickets and conceded just 10-runs in her 4 overs.

After being invited to bat first, India had a shaky start as Shanika Bruce trapped Smriti Mandhana leg before for just 5. But Shafali Verma played a counter-attacking inning to score quick runs. However, she went back to the dressing room after a mix-up in the middle with Jemimah Rodrigues.

Shakera Selman gave another blow to India by dismissing their captain Harmanpreet Kaur for a golden duck. Taniya Bhatia (6) failed to fire big as India was reduced to 92/4. However, Jemimah and Deepti Sharma (34) added an unbeaten 70 runs for the fifth wicket to take India past the 160-run mark. Jemimah top-scored with an unbeaten knock of 56-runs.

In response, Barbados had a poor start as their opening duo Deandra Dottin (0) and Hayley Matthews (9) departed so early. Renuka dismissed both in consecutive overs. She then bagged Kycia Knight (3) and Aaliyah Alleyne (0) in the same over to put Barbados under huge pressure. Barbados never kept going and lost regular wickets. Sneh Rana, Radha Yadav, Meghna Singh, and Kaur picked a wicket each to register a comprehensive win.