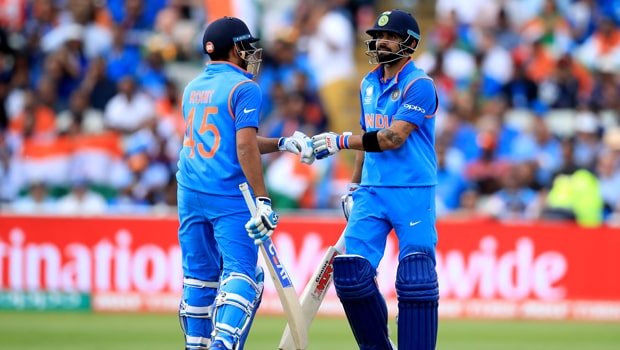 Arch-rivals India and Pakistan have produced numerous mesmerizing moments during their clashes over the years and have thus given their fans memories to cherish for a lifetime. Sparks will fly high and emotions will take over once again as the neighbouring countries lock horns with each other in their World Cup 2019 encounter at the iconic Old Trafford in Manchester on June 16. Let’s have a look at how the two teams stack up against each other.

131 – India and Pakistan have played each other in a total of 131 ODIs with the latter leading the record with 74 victories as compared to the former’s 56 victories, whereas one match ended up without any result.

16 – However, India have dominated Pakistan when it comes to playing in ICC tournaments. Out of a total of 16 such matches, India have aced 13 whereas Pakistan have only managed to win three times. The latest of those three victories, however, came in the Champions Trophy Final of 2017, when Pakistan went on to win the title with a comprehensive victory over India.

2015 – The last time India and Pakistan played each other in a World Cup match (2015), Pakistan’s left-arm pacer, Wahab Riaz, registered a five-wicket haul. However, his performance was overshadowed by Virat Kohli’s match-winning century and Mohammad Shami’s four-wicket haul, which helped India to a comprehensive victory.

55.90 – MS Dhoni’s ODI batting average of 55.90 is the highest for any Indian batsman who has played at least 10 innings against Pakistan. Virat Kohli and Rohit Sharma follow next with averages of 45.90 and 44.61. However, India will miss Shikhar Dhawan, who has been ruled out of the encounter with an injury. The southpaw averages 54.28 in seven innings against Pakistan.

27.50 – Babar Azam is currently Pakistan’s best ODI batsman with 2824 runs in 67 matches at an average of 51.34. However, he would be eager to improve his record against India as he averages only 27.50 in four innings against them.

114, 0, 31 – Fakhar Zaman’s knock of 114 played a crucial role in Pakistan’s victory over India in the Champions Trophy Final of 2017. However, his scores have been 0 and 31 in the two innings he has played against India since then. It remains to be seen how he fares this time.