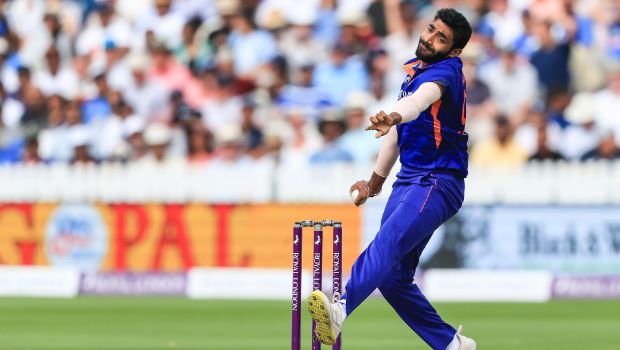 Indian premier pacer Jasprit Bumrah who missed the Asia Cup 2022 due to a back injury could also be doubtful for the ICC T20 World Cup 2022 as things stand. Bumrah was ruled out of the Asia Cup 2022 due to an injury and is now under rehab at the NCA in Bengaluru. The star seamer suffered the same serious injury back in 2019, which derailed all his plans. It has reemerged again and this time the experts are worried that it might take more time for Bumrah to recover and get full fitness. BCCI and the selectors are really worried, with just a month left to announce the squad for T20 World Cup.

Bumrah is one of the best bowlers in international cricket and needs to be managed carefully. Earlier, Bumrah spent a long time on the sidelines with his nagging back injury. Experts believe that it is Bumrah’s strange bowling action that puts a lot of pressure on his lower back and makes him suffer frequent injuries. With T20 World Cup around the corner, India cannot afford him to lose.

If Bumrah misses the T20 World Cup, then India will have to go with Bhuvneshwar Kumar, Harshal Patel, and one from Arshdeep Singh or Avesh Khan. Bhuvneshwar and Harshal are experts in death bowling but India needs someone like Bumrah to take wickets upfront. If Bumrah misses out then the selectors will definitely look at Mohammed Shami who can bowl well in the powerplay overs.

A member of the selection committee said that Shami is not getting any younger and that is why they have to manage his workload too. He admitted that if the team has two premier pacers injured, they have to fall back on someone reliable in Australia. He concluded that Shami understands the conditions better than anybody and could be a great asset. But a call on him will be taken only at a later stage.

ICC T20 World Cup: 3 reasons why India lost against Pakistan
I Know We Will Win This Battle: Kapil Dev Coronavirus Crisis
India needs 320 runs to sweep the series and to retain the Border-Gavaskar trophy