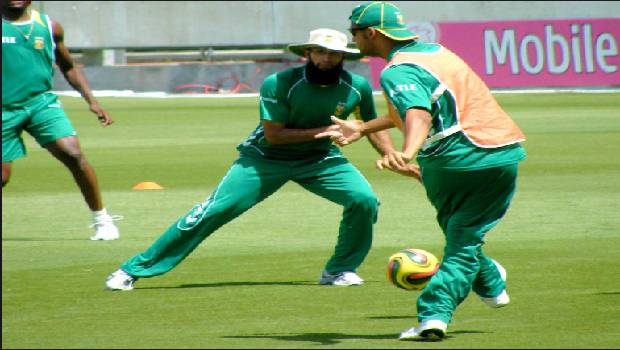 
Pakistan kept alive their chances of reaching the World Cup semi-finals on Wednesday, cruising to a six-wicket win against previously unbeaten New Zealand at Edgbaston. New Zealand scored 237 for six in their 50 overs but that total proved inadequate as Babar Azam scored an impressive unbeaten 101 and Haris Sohail (68) offered valuable support. Pakistan reached their target off the first ball of their final over, finishing on 241/4.

Hafeez was caught by Lockie Ferguson in the deep off the bowling of New Zealand captain Kane Williamson for 32 to leave Pakistan 110-3.New Zealand are second in the table on 11 points behind Australia, the only team who have qualified so far.

The top four teams qualify for the semi-finals.

Earlier, New Zealand reached 237-6 in their 50 overs, with Jimmy Neesham hitting a career-best 97 not out while Colin de Grandhomme made 64.

New Zealand were wobbling badly when the in-form Williamson was dismissed by leg-spinner Shadab Khan, who enticed the skipper into giving an edge to wicketkeeper Sarfaraz Ahmed when he was on 41.

New Zealand, who is second in the 10-team table with 11 points, kept the same team for the fifth match in a row.