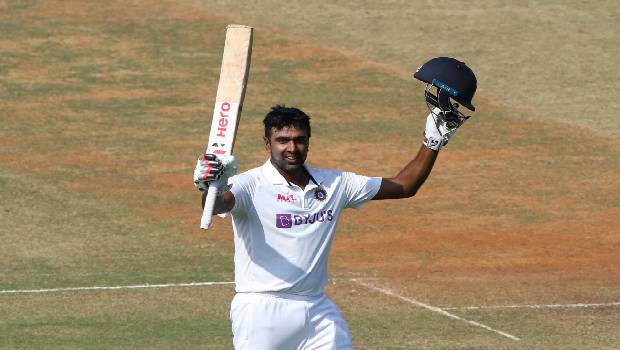 Ravichandran Ashwin displayed his all-rounder talent against England in the second Test by scoring his fifth Test century. His knock included 13 boundaries and a six helping India post a huge target of 482 runs.

Prior to this in a tough batting condition, both Virat Kohli and Ashwin scored brilliant half-centuries to put India in the driving seat and took the lead to 416 at the end of the second session. In the 25 overs bowled before the tea break, India added 65 runs.

Earlier in the morning session, the hosts lost five wickets of Pujara (7), Rohit (26), Pant (8), Rahane (10) and Axar Patel (7) in quick succession. But, Kohli and Ashwin steadied the ship with their 96-run stand for the seventh wicket.

The Indian skipper showed his master class batting on a turning wicket. But lost his wicket post-lunch session by Moeen Ali for a well batted 62 runs. This was the fifth time that Kohli has been dismissed by Moeen Ali in Test cricket.

Kuldeep Yadav (3) came into bat next but was not able to stay long at the crease as Moeen Ali took his wicket sooner. But Ishant made a mark by building a partnership of 11 runs off 30 balls with Ashwin. After Ishant’s dismissal, Siraj and Ashwin played a blistering knock to put a 49-run partnership for the last wicket and placed India in a strong position before India was all-out for 286