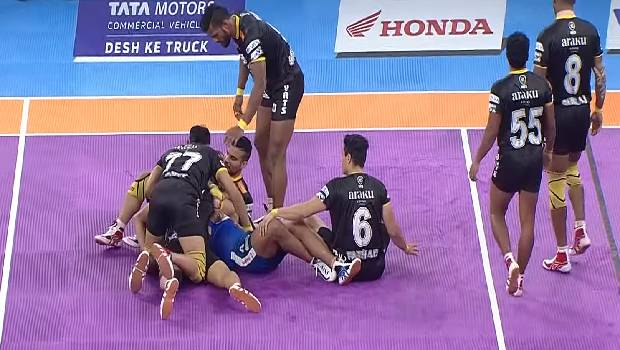 Desai with 18 points played a key role and helped Titans’ snap the Steelers’ three-match winning run. Siddharth, who scored his second Super 10 of the season, took the fight to the opponent, along with his brother Suraj. Titans went into the match with just one win in eight matches, but the lack of confidence was certainly not evident from the outset as the Desai brothers Siddharth and Suraj showed their class.

In-form Vikash Kandola, on the back of a hat-trick of Super 10s, was in no mood to let the Titans run away with the match though as he kept pace with the South Indian team.

The most crucial point of the first half came with eight minutes remaining when Siddarth Desai combined well with his team to tackle Kandola.

Vishal Bhardwaj, playing his 50th match in the PKL, brought about the first all-out in the match, assisting Abozar Mighani to tackle Naveen with four minutes remaining to half time.

The first half ended 21-13 in favour of the Titans.

In the second half too, the Titans’ defence kept Kandola at bay and they inflicted a second all-out on Haryana with 11 minutes remaining till the end with Siddharth Desai at the forefront. It was Titans’ second win of the season.