Haryana Steelers beat U Mumba to leapfrog them in standings 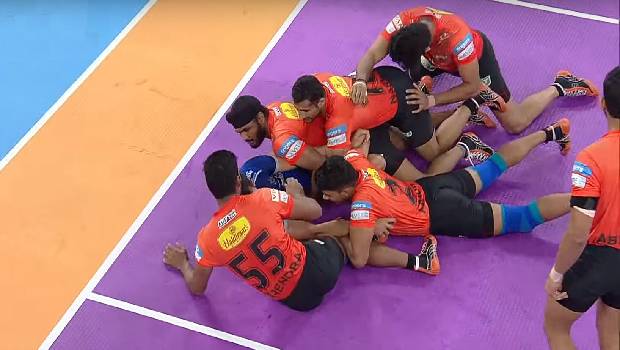 Haryana Steelers held their nerve through a close contest to register a narrow 30-27 win over U Mumba at the Jawaharlal Nehru Indoor Stadium in Chennai on Monday. Vikash Kandola played a starring role for Haryana Steelers with 9 raid points, including a couple of crucial points in the closing stages of the contest, and then U Mumba started brightly thanks to an early tackle by Harendra Kumar that sent Haryana Steelers’ dangerman Kandola to the bench. Arjun Deshwal then got in on the action with a successful two-point raid. Haryana Steelers, though, fought back as Kandola returned to the mat and executed a Super Raid to put his side into a 5-4 lead.

The Season 2 champions responded with a two-point raid by Athul MS to retake the lead as both sets of raiders dominated the first 10 minutes of the contest. Just as it looked like Haryana Steelers were edging towards inflicting an All-Out, U Mumba’s Sandeep Narwal came up with a Super Tackle.

However, Sandeep’s contribution merely delayed the inevitable as Haryana Steelers went on to enforce an All-Out on U Mumba and take a 13-8 lead, and The first half came to a close with Haryana Steelers very much on top as their defenders also began to grow into the contest, and They took a 16-8 lead into the break and ensured that U Mumba would start the second half with just four men on court.