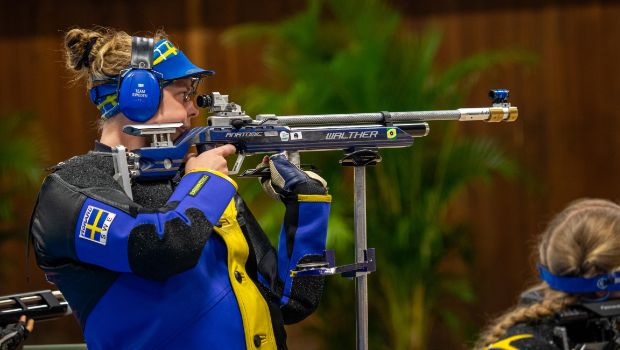 Tokyo Paralympics champion Avani Lekhara won gold at the Para Shooting World Cup with an emphatic new world record score of 250.6 in women’s 10m air rifle standing SH1 in Chateauroux, France. The Indian shooter broke her own world record of 249.6 to secure her a spot at the 2024 Paris Paralympics. From being on the verge of almost missing the tournament due to visa issues, the 20-year-old young shooter produced her best and went on to win the gold at the Para Shooting World Cup.

Avani Lekhara was utterly dominant from the start and never went down. Poland’s Emilia Babska of Poland bagged the silver medal with a total of 247.6, while Sweden’s Anna Normann claimed the bronze went with a total score of 225.6. SH1 category is for athletes with lower limb impairment for competition in rifle events. The Para Shooting World Cup, which is being held from June 4 to 13 in France, is of huge importance to the Paralympics athletes as they get their offer for the Paris Paralympics quota places here.

The world no.2 10m Air Rifle shooter secured the top prize three days after being on the verge of missing the Para shooting world cup as her coach and escorts were initially denied visas to France. However, the issue was resolved after the intervention of the Sports Authority of India and the Sports Ministry. Very soon, Lekhara took her official social media account to express her delight in her team receiving visas and thanked the SAI for their timely and speedy action.

After securing the gold, Lekhara shared her happiness and posted a tweet stating that she feels so proud to bring home the gold in the R2 10M Air Rifle SH1 event with a World Record score and also India’s 1st Paris 2024 Quota, at the Chateauroux2022. The Paralympian shooter expressed that she was ready to do the job with confidence in her first international event since the Tokyo Paralympics. Lekhara thanked everyone who supported her.

Earlier in August 2021, the Indian Paralympian shooter was crowned with the gold medal in the 10m air rifle standing event in the SH1 category at the Tokyo Paralympics. Lekhara followed it up with a bronze medal in the women’s 50m rifle 3 positions SH1 event and became the first Indian woman to win multiple medals at the Paralympics.