Alexey Lutsenko prevails on the gravel in Clasica Jaen 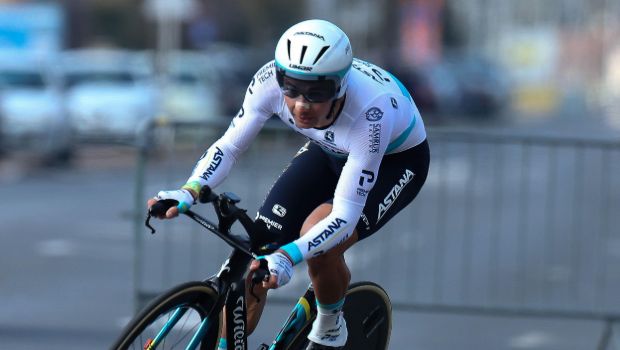 The Kazakh cyclist Alexey Lutsenko used his aggression and power to dominate the inaugural edition of the Clasica Jaen Paraiso Interior race. Clasica Jaen is a new Spanish one-day race that includes 40 km of gravel country roads through the olive groves of Andalucia. Lutsenko managed to force a split in the peloton with a distance of 50 km to go on the third of seven long gravel zones. The Astana Qazaqstan rider then started to attack again with 28 km to go.

Lutsenko created a good distance to leave a small group of riders behind and forced them to fight for the placings. The Kazakh cyclist never looked back after opening a gap of one minute. He used his powers to come on top over the dirt roads and rode well through the streets to win the race. Astana Qazaqstan riders overcame mishaps and mechanical troubles to enroute the victory.

Clasica Jaen, a187.8 km race was a hard and selective one. It has three zones of gravel and some steep climbs in the opening 65 km, followed by a valley road and then a long gravel to climb up, and finally a 20 km loop that was covered four times.

A crash during the race saw several of Astana Qazaqstan riders go down. However, they came back strong into the race and continued to open a gap of two minutes. Lotto Soudal team kept Astana riders under control on the valley road and reduced their lead to a minute. Arrieta tried to fight alone but was soon caught as the race exploded on the gravel climbs.

Lutsenko decided to attack and blew the race apart with 50 km to go. The Kazakh rider powered and showed his superiority when the Bayyasa gravel section came up. He wisely eased up and carved out a minute of lead. Astana riders ensured him good support to finish at the top.

The Kazakh cyclist produced a brilliant race to register his 30th career victory. Lutsenko was awarded a huge golden olive trophy for winning the Interior race. Lutsenko expressed that he feels so happy and proud to start this season with a good win. Lutsenko admitted that the race was so hard. The Kazakh rider will continue racing at this week’s Ruta del Sol.

Singapore Grand Prix Organisers Say "Not Feasible" To Hold Race Behind Closed Doors
Mirabai Chanu Will win medal at Tokyo Olympics: Karnam Malleswari
In the history of golf Mickelson becomes the oldest major champion at the age of 50