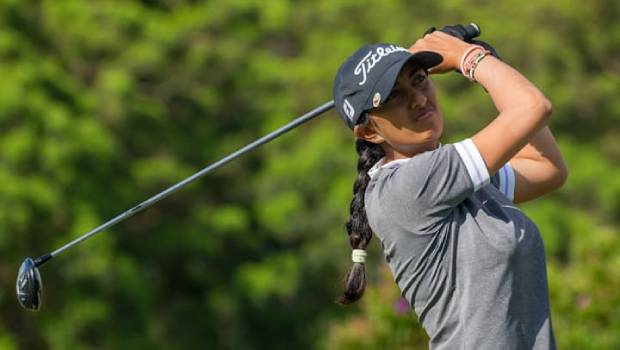 Indian golfer Aditi Ashok sealed her spot for the AIG Women’s British Open after finishing second in the qualifiers. Aditi carded an excellent two-under 68 to grab the second place in the qualifiers at Panmure Golf Club. The 23-year-old Indian star was one of the best performers in the Tokyo Olympics event. Aditi made the entire Indian nation proud as she finished fourth at the Tokyo Olympics.

Aditi Ashok was one of the two Indian women strived for one of the 15 spots in the Major tournament. Aditi finished second while Tvesa Malik ended T-29th and missed out grabbing her berth in the British Open. The event will be played from 19th August to 22nd August at the Carnoustie Golf Links, barely three miles from Panmure.

Carnoustie Golf Links is the 16th oldest golf club in the world. It has hosted many Majors in the past. The 2011 Women’s British Open was played here. The course with tight fairways will be a big test for the Golfers.

Aditi’s appearance in the British Open will extend her record of starts at Majors to 19. Earlier it was 18 after she competed in the Amundi Evian Championship last month. Aditi is going to play her fourth Major of the season. No Indian golfer, either men or women, has played as many. Women have five Majors as against four for men each year.

Aditi’s best Major finish was T-22 in the Open at Royal Lytham and St. Annes in 2018. Aditi will be competing for the fifth time at the Women’s Open. Aditi, who was one-over after 12 holes, did well to get to 2-under and seized the second place. She was just one shot behind the American Lindsey Weaver while Nicole Larsen Broch, Kirsten Rudgeley, Magdalena Simmermacher, and Cheng Ssu Chia were tied 3rd at 1-under.

Earlier Jeev Milkha Singh, the former Indian Golfer praised Aditi Ashok for displaying a brave and brilliant show in the 2020 Tokyo Olympics. Aditi scripted history by finishing fourth with a score of 15-under 269 in the women’s individual stroke play at the Olympic Games. She was just two strokes behind the gold medalist Nelly Korda. Aditi Ashok was just 18 years of age when she made her Olympic debut at the Rio Games, where she finished 41st. She became the first Indian to win a Women European Tour title in 2016. Aditi has given a great boost to the Indian golf. She has given a huge hope to all the youngsters.