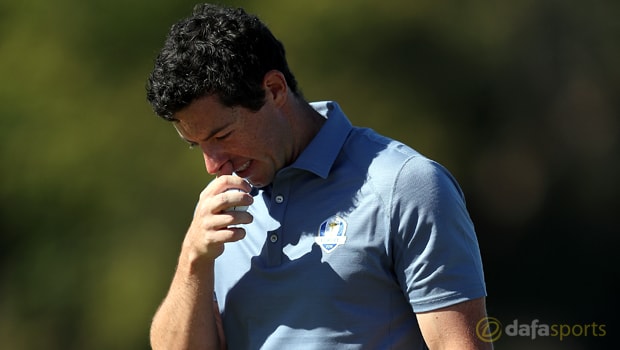 Rory McIlroy has confirmed that a rib injury is going to sideline him until early March.

The four-time Major champion made a pleasing start to 2017 when he finished runner-up to Graeme Storm at the South African Open earlier this month following a playoff.

However he revealed afterwards that he’d been playing through the pain barrier for much of that tournament and following tests it was confirmed McIlroy had suffered a stress fracture of a rib and doctors advised him to rest.

McIlroy has already missed the Abu Dhabi Championship and on Monday he pulled out of this week’s Dubai Desert Classic.

Now he has revealed that the PGA Tour’s Genesis Open and Honda Classic are also off his radar.

The 27-year-old is putting his focus on getting back in time for the season’s first World Golf Championship in Mexico in early March.

McIlroy feels Mexico is the ideal location to return as the WGC event does not feature a halfway cut and it also comes at a time when he will have a week off afterwards as the countdown towards the Masters at Augusta in April will be intensifying.

“I’m trying to get back for Mexico,” McIlroy told FOX Sports.

“That’s my timetable for return. I could probably get back before that.

For example, if I were to play Honda (in late February) and then go straight to Mexico, I would be playing two weeks in a row.

“I’d like to ease my way back in gently. Mexico is the perfect time to return because it’s four rounds, there’s no cut.

I can see how everything feels. I have a week off after that. “Hopefully it will work out that way and that’s when I’m back.”

McIlroy is 8.00 to complete his career Grand Slam of the Major championships by winning the Masters at Augusta in April.