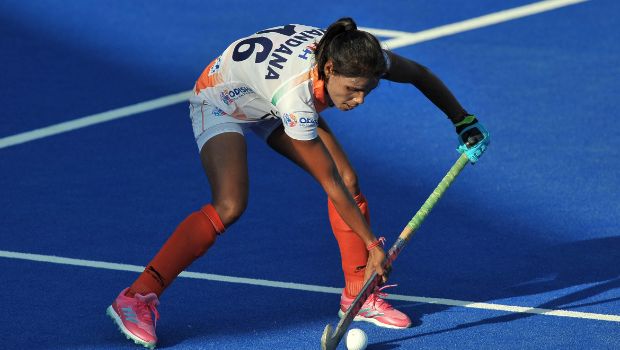 The Indian women’s hockey team was held to a 1-1 draw by China in its second Pool B match at the Wagener Stadium in Amstelveen. It was not an exciting battle to watch as both teams seemed nervous and made too many mistakes throughout the game. Both India and China struggled a lot to create real threats on goal. Zheng Jiali opened the scoring to put China ahead but Vandana Katariya equalized for India towards the end of the third quarter.

Indian women survived some anxious moments despite having an extra player on the field in the last five minutes as the match ended in a stand-off. With a second consecutive draw, India is temporarily placed on top of the Pool B points table with two points from two games along with China.

India, ranked eighth in the world, started slow and steady against world No.13 China. Both teams started to play at a good pace as the game progressed. Though it was an intense encounter, both teams failed to find the net in the first quarter as they made many miss-passes and allowed easy turnovers.

In the second quarter, Jyoti scored the opener for India in the 23rd minute but the goal was disallowed after a Chinese referral showed the ball touching the Indian’s body before sailing into the net. Very soon, India earned their first penalty corner of the match but Gurjit Kaur’s low drag-flick was brilliantly kicked away by Chinese goalkeeper Ping Liu.

When India looked for more circle penetrations, China scored against the run of play to take a 1-0 lead. Zhang Xindan cleverly split the Indian defense and made a fabulous to Jiali, who slotted it past the Indian goalkeeper Savita Punia. Indian women failed to capitalize on their chances as they tried too many things to secure a win.

India bounced back well in the final two minutes of the third quarter. Katariya, the most experienced player on the Indian side, deflected a low drag-flick into the goal to make it 1-1. India, who earned five penalty corners, managed to convert only one. Indian women began the final quarter of play with urgency and looked to attack more. But the Chinese remained compact defensively to scratch out a 1-1 draw.