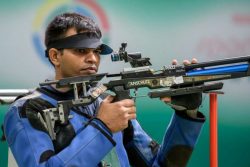 India’s week at the Asian Games got off to an impressive start thanks to a Silver in the Men’s 10m Air Rifle event courtesy Deepak Kumar. Under pressure from the start, Kumar finished with a final score of 247.7, behind China’s Yang Haoran who shot 249.1, a Games Record, to defend his title.

Haoran was always going to be a threat to the rest of the field which featured two Indians, Deepak Kumar and Ravi Kumar. It was Ravi in fact, who was consistently in the top 3 in the final in the initial series, but a 9.2 saw him slip down and get eliminated. He finished fourth eventually with a score of 205.2

Deepak, on the other hand, under pressure to stay in medal contention, shot a 10.8 first to move up to No. 2, followed by a 10.9. This after he had shot of couple of 9s to start off his final with that saw him slip to sixth.
But he held his nerves and scripted that superb comeback when it mattered to give India its third medal from the Games, and second from shooting. This is Deepak Kumar’s first Asian Games medal. He had won a World Cup bronze earlier this year in the 10m Air Rifle Mixed Team event.