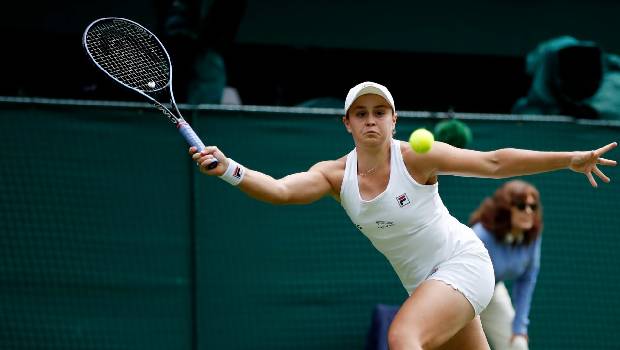 Ashleigh Barty beat Ajla Tomljanovic 6-1, 6-3 in the quarter-final and reached the semi-final of Wimbledon. Barty dominated the game from the start and won it comfortably. She will play her first Wimbledon semi-final on Thursday. Ashleigh Barty will clash against Angelique Kerber in the semis.

For the first time, two Aussie women faced each other in a major quarter-final since Wimbledon 1980. Barty triumphed 6-3, 7-5 in her fourth-round encounter against Barbora Krejcikova on Monday. Meanwhile, Tomljanovic overcame the young British player Emma Raducanu, who was forced to retire down 6-4, 3-0 due to medical reasons.

Ashleigh Barty kept alive her dream of winning the women’s Wimbledon title. The abilities and the strength of the 25-year-old will be tested when she faces the 2018 Wimbledon champion, Angelique Kerber. Angelique Kerber defeated the most experienced and powerful Serena Williams in the straight sets 6-3, 6-3 to grab her third Grand Slam singles title.

Barty had great control on the match with Tomljanovic’s off-breaking twice early on and then broke her for a third time to win the first set 6-1. Tomljanovic’s boyfriend Matteo Berrettini tried to rally her spirits with applause from the guest box, at the beginning of the second set. It boosted up Ajla Tomljanovic, as she broke Barty in the first game. But Ajla promptly lost two serves continuously and gave Barty the break she required.

Ashleigh Barty kicked up the gear and went on to win the game. Barty admired the opponent in a peculiar player style. After the match, Barty said this is a dream come true and it was really nice to share the court with her fellow countrywoman. Barty added she is looking forward to the semis, which will be the final test. She knows her way around the court and needs to play well to give herself a chance.

Ashleigh Barty ranked as the World No. 1 women singles player has consistently shown her determination by winning titles in Melbourne, Miami, and Stuttgart this year. Barty’s dominance came to rest at the Italian Open when she withdrew due to an arm injury. The Aussie further suffered a second-round retirement at Roland Garros due to a hip injury.

Ashleigh Barty took some time to recover and skipped the entire grass-court matches. So far she has played well in the ongoing Wimbledon. If she remains fit, Barty will be one of the top contenders for the Venus Rosewater dish.