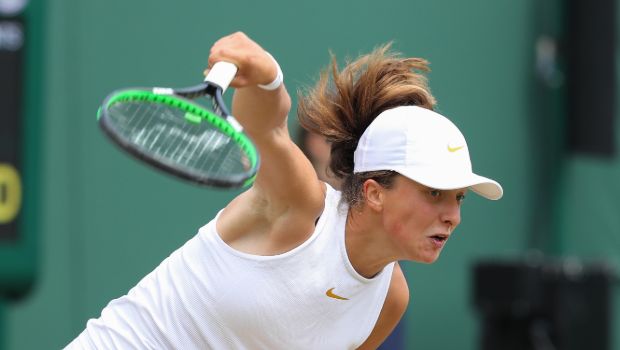 Iga Swiatek outclassed Coco Gauff 6-3, 6-1 to earn a spot in the Miami Open quarterfinals for the first time. The no.2 seed Swiatek bested the no.14 seed Gauff in straight sets on Stadium Court. Swiatek, the youngest player in the top ten rankings, took an hour and 16 minutes to crush the 18-year-old American in a clash between two of the three youngest players in the Top 20. Swiatek has now won a career-best 14 straight matches. The 20-year-old Polish player, who will rise to World no.1 next Monday, will square off against Petra Kvitova in the elite eight.

Earlier, Swiatek won the WTA 1000 event in Doha and then took victory at Indian Wells this month. The Polish sensation is bidding to become only the fourth woman to win Indian Wells and Miami Open in the same season after Steffi Graf, Kim Clijsters, and Victoria Azarenka. Swiatek believes that she is a more complete and tough competitor now than when she triumphed in the 2020 French Open for her maiden Grand Slam win.

Swiatek improved to 2-0 against the American teen by converting four of her 10 breakpoints with a fine play. The Polish player, who leads the tour in return games won and return points won, earned nearly 60 percent of points off from Gauff’s second serve.

Initially, Swiatek struggled to convert any of her first six breakpoints, but as the game progressed she took control by using a big backhand return. From thereon, Swiatek delivered her skills to break for a 4-3 lead. In the very next game, Gauff’s strong hitting play gave her two chances to break back. However, Swiatek showed sheer brilliance to hold on to the game and eventually sealed the opener.

Those would be the only two break points Gauff held all day as Swiatek proved to be the best. The Polish player completely dominated the second set and claimed 14 points in a row. The American produced 4 double faults, while Swiatek accounted for just two. Though Gauff tried well to make a comeback, Swiatek never allowed her to bounce back and won the game with ease.

After registering a remarkable win, Swiatek admitted that she is in a better place and feels more prepared for any battle. Swiatek stated that she is more excited to play against two-time Wimbledon champion Kvitova in the quarterfinals. Kvitova defeated Veronika Kudermetova 7-6(5), 6-4 in a streaky affair. This victory marks Kvitova’s third trip to the Miami Open quarterfinals, but she has yet to reach a semifinal.