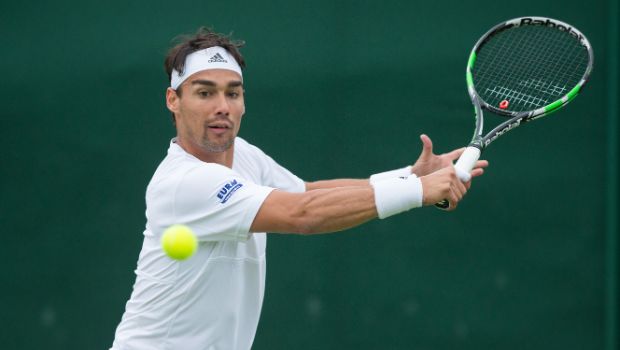 Fabio Fognini celebrated a milestone win on Tuesday at the 2022 Hamburg Open. The 35-year-old Italian displayed a fine show to outclass Aljza Bedene 6-3, 3-6, 7-6 (5) in a third-set tiebreak in the first round of the ATP 500 clay-court event. With the win, Fognini became the first Italian man to register 400 singles wins in the Open Era. Adriano Panatta is next with 392 wins, followed by Andreas Seppi with 386 wins, the second-most among active Italian players.

Fognini’s career highlights include winning the Masters 1000 event in Monte Carlo in 2019 and reaching the quarterfinals of Roland Garros in 2011. The former no.9 player became the 14th active men’s player to achieve the milestone, trailing the likes of Roger Federer (1251), Rafael Nadal (1063), and Novak Djokovic (1012). Other active players on the list include Andy Murray (710) and Richard Gasquet (576), Fernando Verdasco (558), Stan Wawrinka (536), and Feliciano Lopez (503).

In a well-fought match, the Italian rode a lone break to secure the opening set. But Bedene bounced back and played well to force a decider set. However, Bedene squandered five break points in the first game before Fognini prevailed 7-5 in the tiebreak. Fognini will now take on Karen Khachanov on Wednesday for a place in the quarterfinals. The Italian is seeking his first Hamburg title since his 2013 triumph.

Three years ago in Monte Carlo, at the age of 32, Fognini defeated Rafael Nadal on his way to the title. He became the first Italian ATP Masters 1000 champion ever and also the oldest men’s player to crack the Top 10 for the first time. Fognini has always gotten up and given his best for the big matches. He had beaten the Spaniard, a 22-time Grand Slam champion, no fewer than three times.

In 2017 in Rome, he upset World No.1 Andy Murray. Fognini has won nine singles titles. Fognini’s first ATP Tour victory came in 2006 at Amersfoort over Juan-Pablo Guzman. The Italian’s 100th win came against Edouard Roger-Vasselin at the 2012 US Open. No.200 was a second-round win over Grigor Dimitrov in Rome in 2015. Fognini earned his 300th career victory against Gael Monfils in Rome in 2018.

After securing his 400th win, Fognini shared that he feels so happy for playing really good tennis. In 2013, he won the title amid a 13-match win streak that included the title in Stuttgart and a final in Umag.