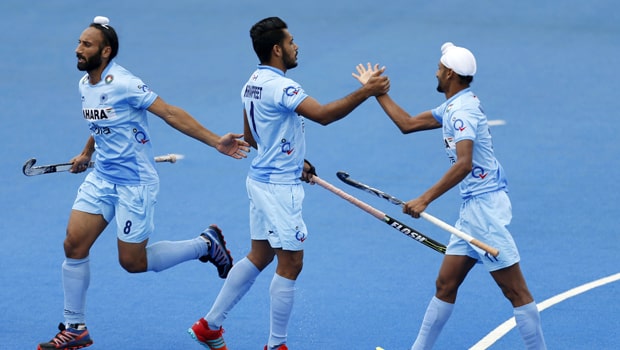 Hockey India named an 18-man squad last month for the FIH Men’s Series Finals, which is slated to begin from June 6 in Bhubaneswar. India will be led by Manpreet Singh with Birendra Lakra acting as his deputy. Grouped in Pool A along with Russia, Poland and Uzbekistan; India will be looking to produce consistent performances under the tutelage of coach Graham Reid. India begin their campaign against Russia and Reid will want to make use of the opportunity by encouraging his players, while also assessing those individuals that fit into his long-term plan. Here are five Indian players to watch for in the upcoming FIH Men’s Series Finals.

Despite being only 26 years of age, Indian skipper Manpreet is one of the most experienced players in the national side with more than 200 caps under his belt. After spending his formative years in the Surjit Singh Hockey Academy, Manpreet’s been a permanent face for India both at the Junior and Senior levels. He was the captain for the Junior Hockey World Cup, Sultan Johar Cup, Junior Men’s Asian Trophy and other tournaments between 2012 and 2014. Manpreet also led India to a gold medal under his captainship in the 2013 Sultan of Johar Cup after defeating Malaysia 3-0 in a final that saw him score a goal. He was titled the Junior Player of the Year by Asian Hockey in 2014 and has since gone on to become captain of the senior team as well.

Regarded as one of the most prodigious talents in the country, Vivek is coached by Indian legend Ashok Kumar. Still a teenager, Vivek became the second youngest player to represent India when he made his debut at the tender age of 17 years 10 months and 22 days. Blessed with exquisite ball control and sharp movement, the now 19-year-old has been scoring goals and creating chances for teammates ever since his introduction to the international circuit. A lot is expected from him in the years to come and the selectors already demonstrated the faith they have in him during the Commonwealth Games, where a young Vivek was preferred over the legendary Sardar Singh. After all, only a special talent can replace someone of Sardar’s caliber and Vivek seems to be just that.

The 24-year-old forward has flourished in the national setup over the past few years and has gone on to become pretty integral in attack as he fast approaches 200 caps with India. Captain of the junior Indian team that finished third in the 2011 Junior Asia Cup in Malaysia, Akashdeep broke into the senior team the following year and hasn’t looked back since. His consistent performances saw him nominated for the FIH Rising Star Award in 2015; the same year he was snapped up by UP Wizards in HIL Auctions with the highest bid for an Indian player in that edition. He was recently awarded the Player of the Tournament award at the 2018 Asian Champions Trophy and will be hoping for more strong performances in the FIH Men’s Series Finals.

Mandeep was also a part of India’s 2018 Asian Champions Trophy triumph and comes from the Surjit Singh Hockey Academy. The Jalandhar-born striker was bought by the Ranchi Rhinos in the inaugural Hockey India League (HIL) auctions and went on to enjoy a highly successful season with the franchise as they won the HIL title, while he received the Upcoming Player of the Tournament award. After making his international debut in 2013, Mandeep has over 100 caps and made some crucial contributions along the way. His hat-trick that gave India a 4-3 win over Japan to avoid an ignominious defeat in the Sultan Azlan Shah Cup was one such occasion and his treble in the World League Final victory over Germany is another.

The 23-year-old defender from Amritsar is another product of the Surjit Singh Hockey Academy and has been amongst the headlines ever since competing in the junior levels. His four goals against Pakistan at the Asia Junior Cup Final four years back is still fondly remembered by many hockey enthusiasts. Top-scorer at the 2017 Asia Cup, Hermanpreet’s expected to have some sort of an impact in FIH Men’s Series Finals by continuing his healthy knack of getting himself on the scoresheet, if nothing else.