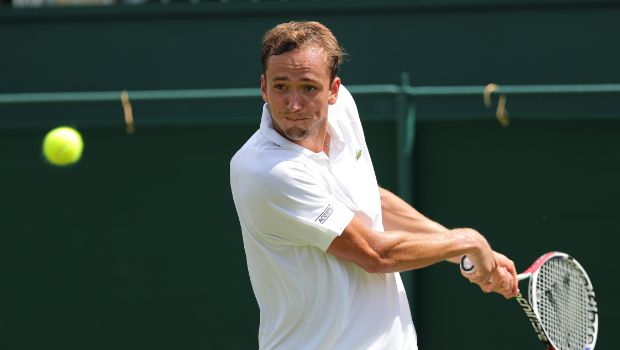 Defending champion Daniil Medvedev has been handed a tough draw to defend his title at the U.S. Open 2022. The Russian top seed is drawn in the men’s singles quarter that also has Wimbledon finalist Nick Kyrgios and world no.8 Felix Auger-Aliasimme of Canada. Medvedev won the 2021 U.S. Open title after beating Novak Djokovic in the final. Medvedev will open his U.S. Open title defense on Monday against Stefan Kozlov of America. The Russian star is expected to face major hurdles on the path to a second Grand Slam title at Flushing Meadows.

While Medvedev will not be looking too far ahead so early, fans certainly will look at the prospect of an enchanting fourth-round battle between the Russian and the Australian Kyrgios who beat the world no.1 in three sets in Montreal this month. The 27-year-old Kyrgios, who has been having one of the best seasons, will open his campaign against compatriot Thanasi Kokkinakis in New York.

Auger-Aliasimme is likely to meet 12th seed Pablo Carreno Busta in the Round of 16 clash. The 31-year-old Spaniard will open his campaign against 2020 U.S. Open champion Dominic Thiem. Thiem has earned a wildcard for the season’s final Grand Slam after having recovered from a series of injuries.

The bottom half of the draw also throws up a potential mouth-watering all-Spanish clash between second seed Rafael Nadal and teenager Carlos Alcaraz, who last year became the youngest player to reach the quarter-finals at Flushing Meadows. Nadal, bidding for a fifth U.S. Open title, will face Australian Rinky Hijikata in the first-round while third seed Alcaraz will take on Argentine Sebastian Baez.

If Nadal manages to secure wins in the early stages, he is likely to meet 7th seed Cameron Norrie in the quarter-final. If the Spaniard goes through the last 8, he is projected to face compatriot Alcaraz in the semi-final.

Meanwhile, Serena Williams, who hinted that she would retire after the US Open, will open her campaign against unseeded Danka Kovinic. However, she is expected to have a potential second round with 2nd seed Anett Kontaveit of Estonia.

Williams recently returned to singles action after a year away following a first-round injury exit at 2021 Wimbledon. She is just 1-3 this season. Williams and Kovinic of Montenegro have never played each other in singles.