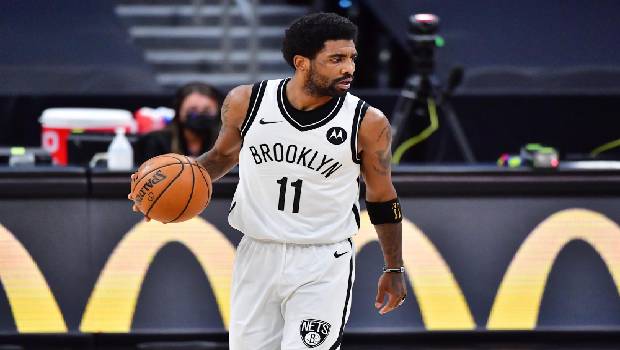 Kyrie Irving nearly got hit in the head by a water bottle thrown from the stands following the Nets’ 141-126 victory over the Celtics in Game 4 of the first round. A clip from the broadcast shows Irving walking through the tunnel and the bottle getting closer to him.

A week earlier, Irving expressed his concerns about how fans would welcome his return to the Boston Celtics as an opponent, saying he was hoping they would keep their taunting to “strictly basketball.”

Marcus Smart, a former Celtics teammate, appeared to validate Irving’s concerns, saying he heard racist comments from Boston fans during his time with the team.

It appeared that the man who threw the bottle after the game was being arrested by the Boston Police. The man was seen in handcuffs being escorted out of the Arena by TD Garden officials and had a lifetime ban from TD Garden imposed upon him.

According to Matt Brooks from Nets Daily, Nets forward Kevin Durant voiced his opinion of the incident, urging fans to “grow up, and enjoy the game” with him.
Following the event, Irving expressed frustration at the “underlying racism” of the event.

“There’s a lot of old ways that have come back,” Irving said, according to ESPN’s Malika Andrews. There is a point where throwing stuff at people and calling them names becomes too much.”

A combined 81 points from Durant and Irving on Sunday, including 9-for-15 shooting from three-point range, were too much for Boston’s defense to handle. The third All-Star for Brooklyn, James Harden, had 23 points and 18 assists.

With the victory, Brooklyn moves to 3-1 in the series, with a chance to play at home in the second round. The Nets can reach the conference semifinals for the first time since 2014 on Tuesday night in Brooklyn. Assuming they win, they will