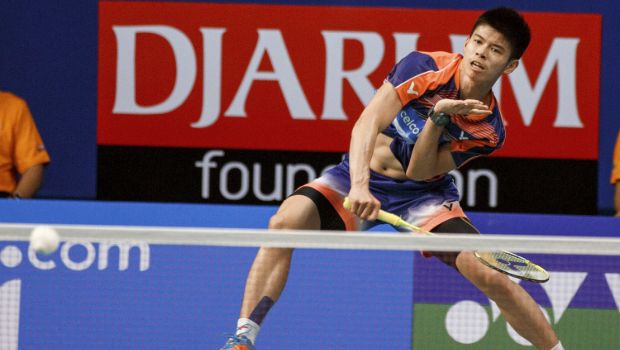 Thailand’s Kunlavut Vitidsarn defeated Lakshya Sen of India in the final to win the German Open Super 300 men’s singles title on Sunday. Kunlavut Vitidsarn outclassed Sen in straight games 21-18, 21-15. The Indian sensation suffered a defeat at the hands of a world no.20 player after he had an apparent leg injury. Sen struggled with his foot movements due to blisters in his left foot. This injury scare may become a big issue for the young badminton player ahead of the upcoming all England Open.

The Indian ace played tremendous in the semifinal against World No.1 Viktor Axelsen. But the leg injury played a massive role in his failure in the final. Sen battled for more than an hour to beat the reigning world champion. The 20-year-old Indian displayed exemplary defense skills against the aggressive Axelsen.
Both fought hard for every single point in the decider. From 2-2, it was 4-4 and then 6-6 before Axelsen raced ahead 15-8. However, Sen held his nerves and looked calm to win the decider game 22-20 and register his first win over the Olympic champion.

In the finals, Lakshya Sen continued with his fine form but failed to grab the sets. He produced multiple comebacks in both sets with a brilliant defense. But an intense pain prevented him to challenge Vitdsarn. Meanwhile, three-time Junior World Champion Kunlavut Vitidsarn took 58 minutes to win his first BWF title as a senior player.

Vitidsarn and Sen matched each other in speed to move 4-4 before the Thai player rode on his variations. Vitidsarn changed up the pace early to trouble the Indian. The Thai player played clever drop-shots and smashes to make Lakshya off balance. Vitidsarn hit the lines with precision to grab a comfortable lead of 12-6. However, Sen bounced back and took control of the net to make it 15-16. But Vitidsarn managed to earn two game points with an overhead cross-court drop. Finally, the Thai player delivered a cross-court smash to secure the opening game.

Vitidsarn continued with the momentum and played prescient to take a 7-3 lead in the second game. The Thai player never allowed Sen to get back into the game and took an 11-5 advantage after the change of sides. However, Sen never gave up and battled well to grab four straight points. Vitidsarn did the damage with his cross-court plays and managed to move ahead 19-15. At last, Sen crashed a return into the net and sent Vitidsarn on a celebratory knee slide.