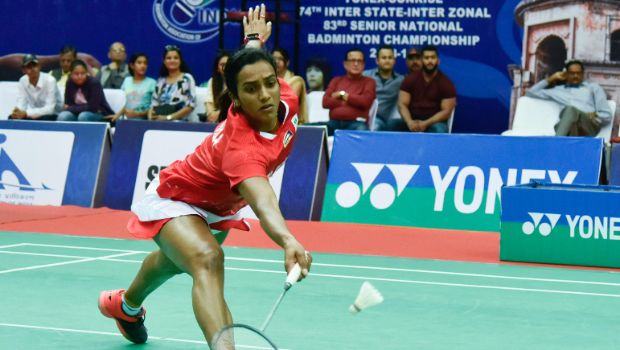 Ace Indian badminton player PV Sindhu defeated Yeo Jia Min of Singapore to storm into the women’s singles final at the Commonwealth Games (CWG) 2022. PV Sindhu sailed into the gold medal match with a solid win over Yeo Jia Min in straight games. Sindhu, world no.7 shuttler outclassed world no.19 Jia Min 21-19, 21-17 to make her second consecutive CWG final. Double Olympic medalist Sindhu has confirmed herself a third consecutive medal at CWG. The Indian shuttler has an excellent opportunity to upgrade the Silver she won in 2018 to gold.

Sindhu was beaten by her compatriot Saina Nehwal for Gold at Gold Coast in 2018. Sindhu will be up against world No.13 Michelle Li of Canada in the final today to complete the set of medals at the Commonwealth Games. The 27-year-old Indian has beaten the Canadian in straight games in both their matches this year. This head-to-head record will boost Sindhu’s confidence who is eying for her maiden CWG gold in singles.

Sindhu, who rode on her superior technical superiority, played cleverly to outplay Jia Min in a 49-minute contest. The Indian proved to be the better player as she kept a firm grip from the start. Sindhu seemed a bit restricted in her movement with the Achilles of her left leg strapped. Sindhu, trailing 5-9 increased levels to play her attacking game and bagged six points to make it 11-9 before going into the first break.

The Indian kept moving ahead by producing the right shot at the right time. Jia Min failed to put any pressure on her opponent, who took the lead to 19-12 with a perfect net shot. The 23-year-old Singaporean bounced back and reduced the gap to 16-19 by using her cross-court slices. But a forehand return from her gave Sindhu three game points, and she sealed the first game on the third attempt.

Jia Min made a good start and looked brilliant once again after the change of ends. But Sindhu started to dominate with her consistency and reeled off five straight points to gain the lead. Fans witnessed a seesaw battle as both shuttlers played some intense rallies. However, Sindhu consolidated her lead by using similar tactics. Finally, Sindhu unleashed a pitch-perfect body smash to secure her spot in the final.

Meanwhile, Lakshya Sen defeated Jia Heng of Singapore 21-10, 18-21, 21-16 to seal a berth in the Men’s singles final. Sen is only the 5th Indian to reach the finals since the inception of CWG.