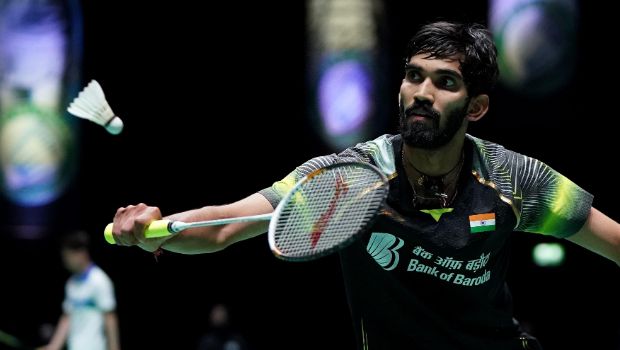 Former champion Kidambi Srikanth crashed out of the Denmark Open Super 750 tournament after suffering a straight-game defeat to Loh Kean Yew of Singapore in the pre-quarterfinals in Odense on Thursday. Srikanth lost to the seventh-seeded opponent 13-21, 15-21 in a match that lasted 35 minutes. Srikanth, the 2021 World Championships silver medalist, had won the title here in 2017. The 29-year-old Indian shuttler had a head-to-head record of 1-1 against Yew before Thursday’s match.

World no. 11 Srikanth led the first game for a few initial points, but Loh bounced back strong to seal the first game. In the second game, too, Srikanth looked desolate with the world no. 5 Singaporean earning points from smashes, drops, and drives. Loh looked sharp on the court, showcasing his speed and defensive skills.

Srikanth battled hard to keep himself in the mix in the second game but he was not able to force a decider in the second-round match. Eventually, the Indian player conceded the second game 21-15. With this win, Loh Kean Yew took a 2-1 head-to-head lead over Srikanth and sealed his berth in the quarterfinals.

Earlier, Srikanth delivered his best and claimed a hard-fought win against Ng Ka Long in the opening match. Srikanth fought back from the opening-game defeat to win 17-21, 21-14, 21-12 but he was not able to match Loh’s intensity in the Round of 16 match.

In men’s doubles, Indian duo Satwiksairaj Rankireddy and Chirag Shetty, seeded seventh in the tournament, stormed into the quarterfinals with a straight game 21-14, 21-16 win over Indonesian duo of Muhammad Shohibul Fikri and Bagas Maulana. It was a clinical performance from Satwik and Chirag who are hoping to make a splash in Odense.

The Indian pair continued their winning streak with sheer dominance and defeated the All England Champions in 36 minutes. The Indian duo will next face the fourth-seeded Malaysian pair of Aaron Chia and Soh Wooi Yik in the quarterfinals.

In another men’s singles match, world no.8 Lakshya Sen knocked out his compatriot HS Prannoy to enter the quarterfinals of the Denmark Open. Sen battled for 39 minutes to register a 21-9, 21-18 win over Prannoy.

With this win, the 21-year-old Lakshya took a 3-2 head-to-head lead over Prannoy, who defeated the former in the BWF World Championships and Indonesia Open. Lakshya will be up against Kodai Naraoka of Japan in the quarter-finals.