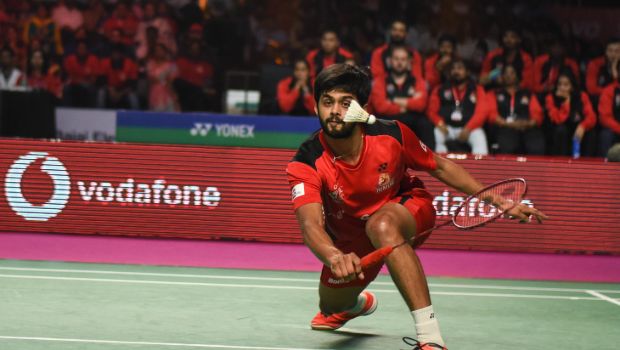 Indian shuttler Kidambi Srikanth got off to a good start at the 2021 BWF World Championships in Spain. The 2021 BWF World Championships is held from 12th to 19th December at Deportes Carolina Marín in Huelva, Spain. A total of 324 competitors from 49 nations take part in the World championships event. Srikanth defeated the home favorite Pablo Abian in the opening round on Sunday. Former world no.1 Srikanth outplayed Abain in straight games 21-12, 21-16 to advance into the second round. Srikanth took just 36 minutes to ease past Abian.

The Indian shuttler will face Li Shi Feng of China in Round 2 of the Men’s singles event. The 12th seeded Srikanth always had a grip on the match and ended it out pretty well despite a late fightback from Abian. Abian gave a good fight in the second game but Srikanth continued with his momentum to secure the win. Srikanth smashed brilliant cross-court shots. His footwork was excellent.

Later on the day, another Indian shuttler Sai Praneeth once again disappointed by losing the opening round. Mark Caljouw of the Netherland defeated Sai Praneeth in a close encounter. The 2-year-old performed exceedingly well in the first set but the Dutch came back strong to secure the game 21-17, 7-21, 18-21.

Earlier, Praneeth also lost to Caljouw at the 2021 Tokyo Olympics. Sai Praneeth was the only Indian male shuttler in 36 years to win a bronze medal in the BWF World Championships in 2019 after Prakash Padukone (1983). Caljouw gained confidence and played brilliantly to bag the second game. Though Praneeth was on top in the decider, Caljouw banged some good net plays towards the end to seal a win.

Earlier in the day, the Indian duo of Pooja Dandu and Sanjana Santosh retired after they lost the first game 12-21 to the Dutch women’s doubles pair of Alyssa Tirtosentono and Imke van der Aar. The Indian men’s doubles pair Manu Attri and B Sumeeth Reddy also lost to Joel Elpe and Rasmus Kjaer of Denmark in the opening round. The Denmark men defeated the Indian pair in straight games 21-16, 21-15. The game lasted for 32 minutes before the Indian duo exited the year-ending event.

India’s brightest hope PV Sindhu, who is the defending champion, will open her campaign against Martina Repiska of Slovakia. PV Sindhu is the only female shuttler to represent India in the women’s singles event. Reigning champion PV Sindhu got a bye in the first round.

Indian star shuttler PV Sindhu is one step away from winning her maiden gold
PV Sindhu on being conferred with Padma Bhushan
Vienna Open: Alcaraz Earns Revenge against Andy Murray