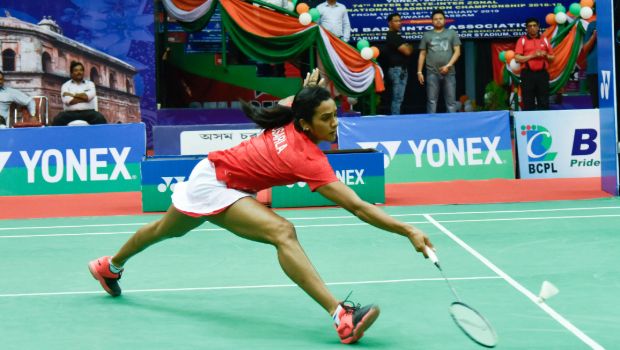 Indian badminton queen PV Sindhu stormed into the women’s singles quarter-finals of the BWF World Championships with a dominating win over Pornpawee Chochuwong of Thailand. Defending champion PV Sindhu showed her class and skills to outclass Pornpawee Chochuwong in a thrilling straight games win. PV Sindhu was at her very best as she kept her recent nemesis at bay and pulled a memorable win. The world no. 7 shuttler took 48 minutes to defeat her opponent in straight sets 21-14, 21-18 in the pre-quarterfinal match.

The Sixth seeded Sindhu registered a famous win to extend her head-to-head record to 5-3 against Chochuwong. Sindhu surpassed the Thai Shuttler with a delightful mixture of precise attack and rock-solid defense. Sindhu dominated the game to avenge her twin loss to Chochuwong this season.

One loss was in the group match of BWF World Tour Finals earlier this month and another in the All England Championships in March 2021. Sindhu was impeccable and played with confidence to put an end to her losing streak. The double Olympic medallist Sindhu will clash with the top seed and world no.1 Tai Tzu Ying in the quarter-finals.

The Indian ace took an early 5-1 lead but Chochuwong rallied to narrow down the gap to 5-4. Sindhu zoomed ahead from there on as she made it 15-10 with some excellent smashes. Sindhu then went on to pocket the first game from 19-11 with good cross-court plays and placements.

The second game was a tough one as both shuttlers exchanged points. Though Sindhu began on the front foot with a 3-0 lead, the Thai player battled well to level her. Sindhu took three straight points and went 7-4 ahead. Chochuwong reduced the deficit to two points with good attacking play.

Sindhu continued to be relentless and took five points lead (11-6) at the change of ends. Both players played some long rallies with the Thai shuttler winning a few of them. Chochuwong, who was six points behind secured three straight points to reduce the gap to 15-17.

Chochuwong made a comeback and put up a good fight to make it as 18-19. Sindhu kept her cool to win a crucial point after a long rally to make it 20-18 before winning the second game and the match. Sindhu, who got a first-round bye, defeated Martina Repiska in straight games 21-7, 21-9 in the second round.

Cousins is closer to a move to Houston Rockets
Coco Gauff: American teenager breaks into World's top 50
Iga Swiatek beats Vekic in San Diego to win the eighth title of the season