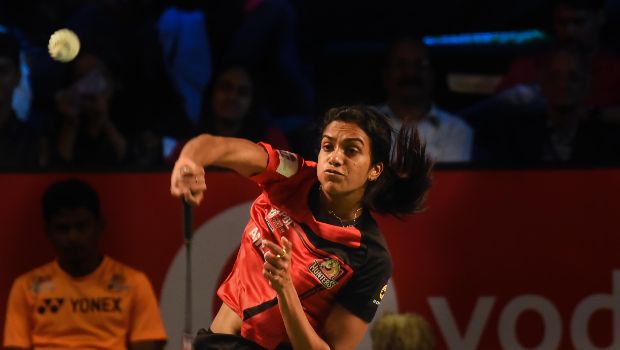 The 2022 Malaysia Master is underway in Kulala Lumpur. Indian ace PV Sindhu was made to work hard by He Bing Jiao of China to emerge victorious in the opening round of the Malaysia Masters badminton tournament on Wednesday. Two-time Olympic medalist PV Sindhu produced a clinical performance and dominated from the start to outclass Bing Jiao 21-13, 17-21, and 21-15. The seventh seed advanced to the pre-quarters after battling it close to an hour against the Chinese.

Though Sindhu suffered a mid-game scare, she played strong and regained her momentum to beat Binga Jiao. With the win, world no.7 Sindhu avenged her first-round exit from the Indonesia Open Super 1000 last month, as Bing Jiao defeated her in straight games. However, the Chinese continue to lead Sindhu in the head-to-head encounters 10-9.

It was one-way traffic in the first game as Sindhu took a big 11-2 lead. The Indian continued with her rhythm to pocket the opener with ease. Bing Jiao started the second game with a 4-0 lead and made it 11-7 at halfway. Though Sindhu made a storming comeback, she was unable to stop Bing Jiao who sealed the second game. The 25-year-old Chinese shuttler produced a mini-comeback despite Sindhu’s lead in the third game. But Sindhu held her nerve to prevail over her opponent in the decider game.

Meanwhile, it was the end of the road for the senior Indian shuttler Saina Nehwal. The 2012 London Olympics bronze medalist was knocked out 21-16, 17-21, 14-21 by Kim Ga-Eun in her opening round tie. The 24-year-old South Korean got the better of Saina and registered a remarkable win.

In the men’s singles, Parupalli Kashyap and B Sai Praneeth advanced to the second round with comprehensive wins. Kashyap, who went down in the first set, bounced back well to claim a 16-21, 21-16 21-16 victory against the local favorite Tommy Sugiarto.

Praneeth showcased a stunning play from the start and hardly struggled against Kevin Cordon. The 29-year-old played a brutal game to register an easy straight game 21-8, 21-9 win over Guatemala’s Cordon in less than 30 minutes. Praneeth will be up against Li Shifeng of China in the pre-quarterfinals.

On the other side, it was an early ending for Sameer Verma, who went down to Chou Tien Chen 21-10, 12-21, 14-21. Though Sameer kept fighting till the end, he was unable to overcome the fourth-seeded Chinese Taipei shuttler.

Sights on number one spot - PV Sindhu
Roger Federer: Retirement is getting closer and I will miss tennis a lot
Varun Kumar players spending time at home will help the team in future challenges