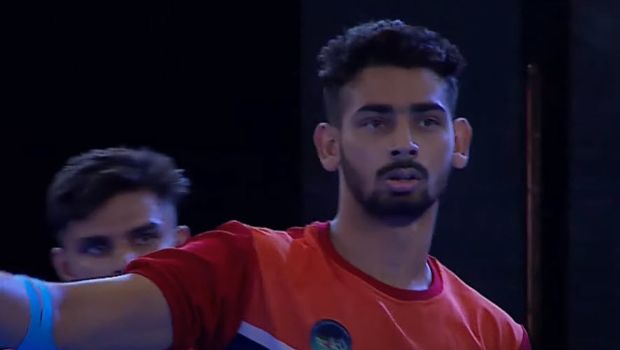 Tamil Thalaivas were behind Patna Pirates and struggled to take a lead for the most part of the match. But an inspiring performance from the Tamil Thalaivas’ raider Himanshu Singh helped them record a come-from-behind 33-32 win against Patna Pirates at the Shree Kanteerava Stadium in Bengaluru. Tamil Thalaivas, who were in search of their first win of the Pro Kabaddi League season 9 held their nerves to beat Patna Pirates in a very close game. Himanshu was the wrecker-in-chief for the Thalaivas with his brilliant, quick, and timely Super 10.

With this win, Tamil Thalaivas are placed eighth in the standings with 10 points. On the other side, Patna pirates are placed at the bottom and are yet to register a win this season. Himanshu led Tamil Thalaivas by scoring 8 raid points and 3 bonuses, while Narender Hoshiyar contributed 9 points to the side from Tamil Nadu. Rohit Gulia was the star performer for the Pirates with 11 points. The Pirates’ lead raider Sachin contributed 6 points.

Narender chipped in with a few raids as the Tamil Thalaivas took a 6-3 lead in the 9th minute. However, a few moments later, Gulia produced a multi-point raid and helped the Pirates to level the scores at 6-6. Himanshu then pulled off a fabulous raid in the 14th minute and handed a two-point lead (10-8) to his team.

But very soon, the Pirates inflicted an ALL-OUT and snatched the lead at 13-10. Though Narender kept picking up raid points for the Thalaivas, the Pirates kept forging ahead and managed to take a slim lead at 17-15 in the first 20 minutes.

Gulia continued to showcase top form in the second half as the Pirates extended their lead to 21-16. The Pirates continued with the momentum and dominated the match with some brilliant raids. Patna effected another ALL-OUT in the 26th minute and led the game comfortably at 26-21. However, the Thalaivas put up a fight through Himanshu, who pulled off an excellent two touchpoints in a Do-or-Die raid in the 37th minute and leveled the scores at 29-29.

Soon after, Tamil Thalaivas inflicted an ALL-OUT and went on to lead the match by two points 32-30. Gulia then took a clever bonus to cut the deficit to just one point. But Aashish tackled Gulia in the last minute of the game and sealed a thrilling win for his side.