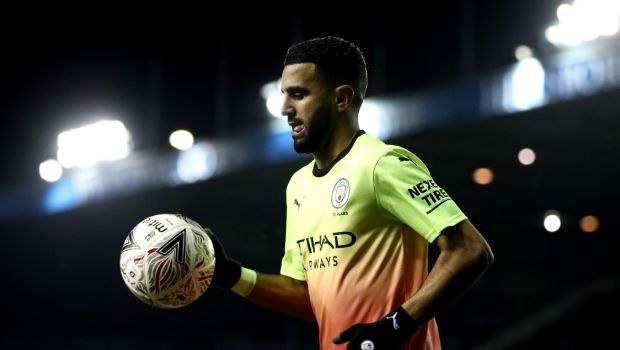 Manchester City produced a devastating attacking display to beat Sporting CP. Manchester City crushed the hosts with a score of 5-0 in the first leg of the Champions League last-16 tie. After defeating the Portugal Sporting, Manchester City became the first team to win five consecutive away games in the knockout stage. Defending champions have effectively booked a quarter-final spot after thrashing Sporting CP in Lisbon.

The Portuguese attacking midfielder Bernardo Silva was brilliant on the field and netted twice. Riyad Mahrez, Phil Foden, and Raheem Sterling scored one each to secure a commanding win. Manchester City dominated from the start with more possession and scored four goals in the first half. No team has ever led by four goals at half-time in an away-home match in a Champions League knock-out tie.

Manchester City, who are the favorites to win the title, made a dream start as Mahrez scored an early opener in the 7th minute. Kevin De Bruyne made a clever cutback pass to Mahrez, who tapped it into an empty net. Initially, the goal was disallowed for offside, but later it was awarded after a lengthy VAR check. City doubled the lead in the next ten minutes when Bernardo showed extraordinary skill to fire a stunning half-volley off the underside of the crossbar from a corner.

The city continued with an attacking game and played excellently with 93percent pass accuracy. Foden put his side 3-0 upon the 32nd minute. Foden stole in between two defenders and guided Mahrez’s cross into the net from close range. Manchester City looked to convert all the shots on target as goals. They attempted six and scored five.

Bernardo Silva scored his second and the city’s fourth just before half-time. Silva netted from a heavy deflection off Goncalo Inacio. Silva made a fine header to score his hat-trick, but the same was denied for off-side. England star player Sterling scored his first goal of the game with a stunner. He scored the winner with a sumptuous shot into the top corner.

Sterling cleverly fooled the Portuguese midfielder and finished with a superb 20-yard effort. With this, the English winger moved into the top-10 on City’s list of all-time highest goal scorers. Manchester City would be the most famous predicted title winners after delivering an outstanding display. The city will host Sporting CP in the second leg of the last-16 tie on 9th March.