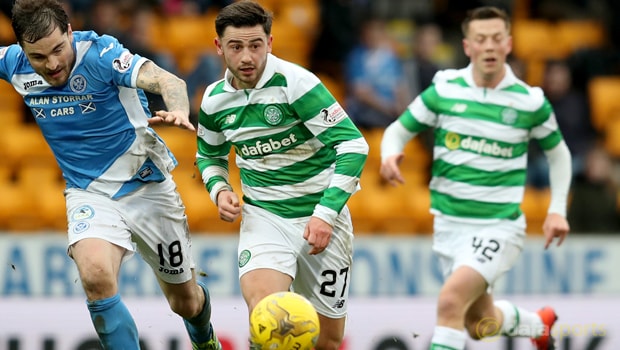 Celtic assistant manager Chris Davies is confident that winger Patrick Roberts has the capabilities of going right to the top.

Roberts, 20, is coming towards the end of an 18-month loan deal in Glasgow from parent club Manchester City.

The young Englishman impressed against the Citizens in the Champions League this season while he has scored 11 goals in 46 appearances for the Hoops.

Davies has revealed that both he and manager Brendan Rodgers were aware of Roberts’ talent long before they arrived in Glasgow last summer.

“We were aware of Patrick at Liverpool when he was in the Fulham youth ranks and what a talent he was coming through,” Davies told the Celtic website.

“The opportunity to come and work with him was something I was personally excited about and, having worked with him close hand, he is a player with an enormous talent.”

Davies feels Roberts’ skillset is ideally suited to playing in a dominant team like Celtic, where one-on-one skill is vital when it comes to facing direct opponents with a defensive mindset.

“The idea at the big teams is that, if you dominate a lot of the ball, you have wingers who are one-v-one specialists and can take people out of the game,” he added.

“Patrick has an incredible talent for that. He can face up to any defender and usually beats them.” Roberts will hope he can end the season in Scotland having helped steer Celtic to their first domestic treble in 16 years.

The Hoops are unbeaten domestically and have already pocketed the League Cup. The youngster has made little secret of his desire to try and force his way into Pep Guardiola’s plans at Man City next season and Davies feels he can go right to the top.

“He has been progressing well, he’s a real talent with enormous potential. I’m sure he will have a great career ahead of him,” he said.

Roberts is 6.00 to score Celtic’s opening goal in the weekend Scottish Cup clash with Inverness at Celtic Park, a game the Hoops are 9.50 to win 4-0.